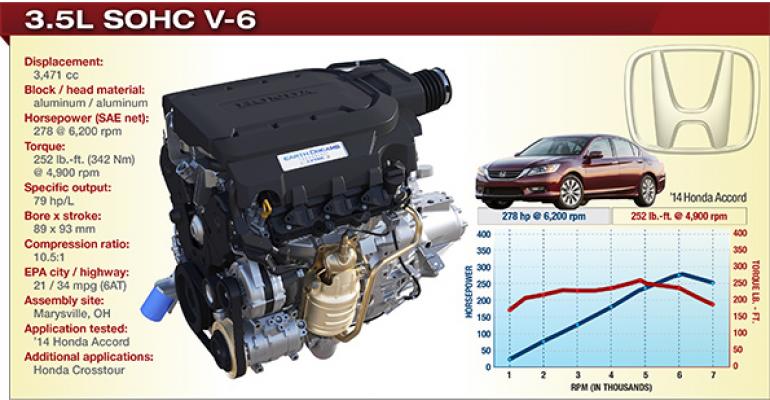 Ward’s 10 Best Engines competition has recognized outstanding powertrains for 20 years. This installment of the 2014 Behind the 10 Best Engines series looks at the development of Honda’s 3.5L SOHC V-6.

The Ward's 10 Best Engines jury collectively averaged more than 28 mpg (8.4 L/100 km) over 837 miles (1,347 km) of driving, well better than the 25-mpg (9.4 L/100 km) combined EPA rating. "Turbocharged 4-cyl. engines, fast becoming the standard in this segment, struggle to post numbers like that," one WardsAuto juror wrote, “as did some naturally aspirated I-4s in this year's competition.”

The most significant difference between this V-6 and previous versions is the first-ever marriage of Honda’s intelligent variable-valve timing and lift electronic control (i-VTEC) to variable cylinder management (VCM), which is Honda's clever cylinder-deactivation system. General Motors and Chrysler deactivate intake pushrods to shut down cylinders in their cam-in-block engines during light-load conditions, but Honda was first to use its (patented) zero-lift cam lobe technique to accomplish that in an overhead-cam layout.

Honda's i-VTEC hydraulically shifts the camshafts back and forth between two intake valve lobes. The first one optimizes valve timing and lift for low-rpm torque; the second is a high-lift, longer-duration profile for increased power above 5,150 rpm. Then this engine's VCM adds a third lobe with a zero-lift profile to the rear-bank cylinders only, which deactivates those three cylinders by keeping their intake valves closed.

While Honda's previous-generation VCM shut down two and sometimes three cylinders to save fuel, depending on driving conditions, this new system transitions between 6- and 3-cyl. modes only. And that simplification enables the addition of i-VTEC.

“We can only have three lobes and three oil circuits to control that,” Honda R&D Engine Design Group Manager Mike Dunn explained in a 2013 interview. “So taking away the 4-cyl. mode allowed us to add the high valve timing.”

Not surprisingly, the top two priorities for the V-6 redesign were efficiency and performance, both helped by friction-reduction measures (including molycoating pistons, a new method of cylinder honing), along with integrated exhaust manifolds and a new “tumble-port” cylinder-head design. “We increased our tumble ratio to generate more controlled turbulence into the cylinders to improve combustion efficiency,” says Yasutaka Hayashi, principal engineer-Honda R&D Engine Design.

“Reducing weight was also a direction,” adds Dave Jessen,V-6 engine engineering project leader-Honda of America Manufacturing. “Because we had a redesign opportunity, we looked for ways to trim a little weight here and there. We went to plastic head covers and changed the shape of the bearing caps to reduce weight, for example, and a lot of other small items added up throughout the block and head."

The biggest challenge was eliminating the 4-cyl. mode while maintaining the fuel-economy achievement with the 3-cyl. mode, Hayashi says. Achieving that goal required expanding the operation range of the VCM, and – because operating in the 3-cyl. mode created NVH challenges – active noise cancellation and a new vibration-smoothing mount system were developed.

“The second challenge was combining i-VTEC with VCM, which required more oil to do the activation and deactivation functions,” Hayashi says.

“That increased the oil pump’s workload and friction, which conflicted with fuel economy. Meeting that challenge required carefully managing oil pressures under all conditions to maintain the same-size oil pump.”

Direct Injection Not Yet Necessary

Going forward, engineers are trying to come up with more new technologies to reduce friction and high-strength materials to make the powertrain lighter and more compact. “But there are still existing available technologies that we can apply,” Hayashi says. “Combustion efficiency, mass and friction reductions are all areas where we can work.”

While it seems these technologies eventually will have to be employed at some point to satisfy ever-increasing fuel-efficiency demands, Hayashi does not yet see a strong need for DI in this application.

“The Acura [version of this] V-6 is a downsized engine, and we introduced direct injection because we wanted high performance and improved fuel economy,” he says. “But we are not considering any engine downsizing on the Accord. We think its performance is adequate, and we can still be competitive in fuel economy through friction reductions and thermal efficiency improvements.”

And that DI version, which now powers several upscale Acura vehicles, will be readily available if and when higher-cost technology begins to make sense in lower-priced Honda Accords.

Regarding DOHC, Hayashi says there always is discussion about it, but the automaker still thinks it can be competitive with single overhead cams.

“One of our philosophies for this V-6 is to keep it an affordable, compact and rational design, and we want to keep that philosophy,” Hayashi says.

Even so, lots of technologies such as electrified on-demand water and oil pumps are being studied, Hayashi says.

“We have a laundry list of technologies that could potentially be applied,” says Honda R&D Chief engineer John Dirrig. “But the value equation is always what we are looking at.”

One of the items on the list is stop/start systems, which are finding more U.S.-market applications, Dirrig says. Honda is using stop/start with this engine in its just-introduced ’15 Acura TLX.