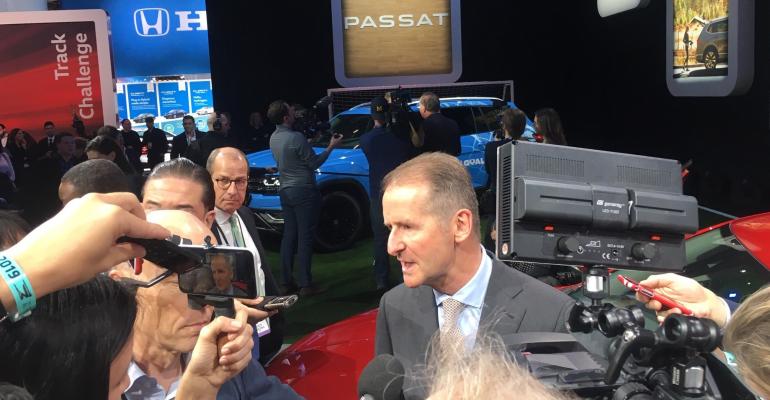 The automaker will build a second assembly plant in Tennessee to produce electric vehicles beginning 2022.

DETROIT – Volkswagen confirms plans to expand its Chattanooga, TN, assembly plant to build electric vehicles and tie up with competitor Ford on light trucks, as the German automaker looks to solidify and expand its presence in the U.S. market.

CEO Herbert Diess says $800 million will be invested in a second assembly plant in Chattanooga, already home to Atlas CUV and Passat sedan production. The new plant, expected to launch production in 2022, will spawn 1,000 new jobs at the VW operation, Diess says.

The investment will add to the $2.3 billion already put into the Chattanooga facility, which currently employs 3,800 people and has built 730,000 vehicles since its launch.

The new plant will build the MEB-based ID Cross, a battery-electric CUV that will hit the U.S. market in 2020. An all-electric minivan called the ID Buzz, also based on the MEB and styled after the iconic VW Bus, will launch in the U.S. shortly after the I.D. Crozz. It will be built in Hanover, Germany, and could be a candidate for Chattanooga production, but Diess says that will depend on demand.

Diess also talks around the edges of the Ford collaboration, which will be detailed at a press conference tomorrow at the North American International Auto Show here.

“VW is not as big in small commercial vehicles, so we’ll join forces there,” he says, adding that means small vans and “even midsize pickups.”

The tie-up also is likely to involve sharing some production capacity in Europe, but Diess does not address that here, saying only that “partnerships often are about economies of scale.” He says any more talk of Ford will have to wait a day.

Diess says VW sees EVs as becoming a big opportunity for VW, noting the automaker wants to be “the most relevant player in the segment by 2025.” VW is investing $34 billion in E-mobility, he says.