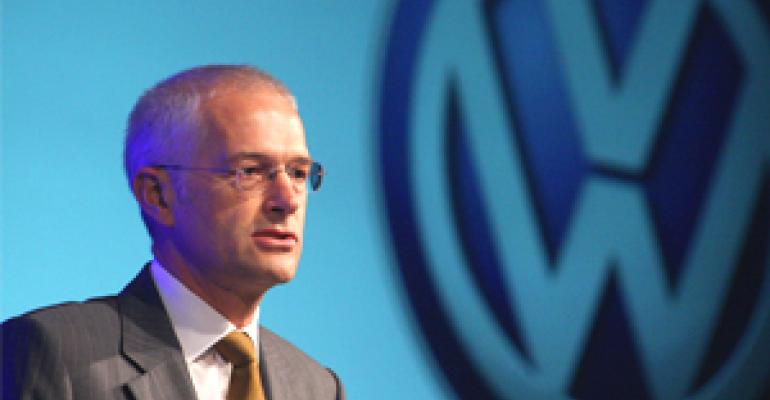 The brand&#8217;s sales operation could slip into the black this year for the first time since 2003, says a top U.S. executive. SOUTHFIELD, MI – As Volkswagen edges closer to a first-stage profitability mark in the U.S., company executives are targeting a higher share of North American production as a way to continue volume growth and secure relief from a strong euro that is negatively impacting margins.

Jonathan Browning, president and CEO of Volkswagen of America, says the goal is to achieve profitability for his entire group in 2013, but the VW-brand sales operation separately is on track to post positive results this year.

It would mark the first time the sales division has been in the black since 2003, Browning tells reporters following a presentation here to the Society of Automotive Analysts.

The financial performance would exclude investment in VW’s new assembly plant in Chattanooga, TN, and results for other manufacturing operations, as well as its financial-services business.

“This is a very narrow definition of profitability,” Browning admits, noting the real target is for all facets to be profitable, including its Audi, Bentley and Lamborghini brands. “(But) it’s definitely in the direction of our goal. We’re making progress.”

In laying out objectives for Volkswagen in the U.S., he tells the SAA the brand expects to source 75% of the vehicles it sells in North America by 2014, up from 54% today.

But Browning won’t say whether that target can be met strictly with the vehicles now in production or if VW will have to source additional models in North America. Unconfirmed reports have surfaced in recent weeks the auto maker is considering shifting U.S.-market production of the Golf model to its Puebla, Mexico, plant.

“I think it’s safe to say that with the Jetta, Beetle and Passat you can get to a very large proportion of our sales,” Browning tells reporters. “The important thing is we’re building a business structure here that is increasingly insulated and isolated from the volatility of the euro.”

VW already is hitting its 2014 target of 85% North American parts content on the Jetta, built in Mexico, and Passat, assembled at its new plant in Chattanooga, he says.

Ramp-up of the Tennessee plant, now operating on two shifts, is meeting VW’s timetable, Browning indicates, with 6,000 of the cars already at or on their way to U.S. dealers at the time of last week’s official sales launch.

“Because we had the challenge of a new plant, new product, new people and new supply base, we gave the plant an extended ramp-up,” he says. “We’re very pleased with how that start-up has gone.”

Browning reveals today that VWA is revamping its U.S. distribution network, going from four regions to five with the addition of a new South Central headquarters in Dallas that covers 16 states and 96 dealers.

The newest zone will help the auto maker work more closely with its retail body as it transitions to meet the 2018 goal of more than doubling sales to 800,000 vehicles annually.

VWA’s dealers are a happy bunch these days, Browning contends, citing National Automobile Dealers Assn. figures of an average 2.6% profit margin that is outpacing the industry overall. Another NADA study ranks VW third-highest in how dealers view the franchise’s value in the coming 12 months, he says, calling it the best performance in the brand’s history.

The new quality process, put in about a year ago “comes directly from (VW CEO Martin) Winterkorn, who has driven it down throughout the organization,” Browning emphasizes.

Despite the growing volume, Browning vows VW will “retain its price premium” in the market. Brand sales incentives are 30% below the industry average, he says, adding a Jetta draws transaction prices $2,500-$3,000 higher than a comparable Toyota Corolla or Honda Civic.

Buyer loyalty also is on the rise, to about 40% from less than 35% a few years ago, Browning contends.

“By 2018, that needs to be 50%” to hit that year’s volume goals, he adds. “We want to keep (customers) first with VW brand, then pass them on to Audi and Lamborghini.”