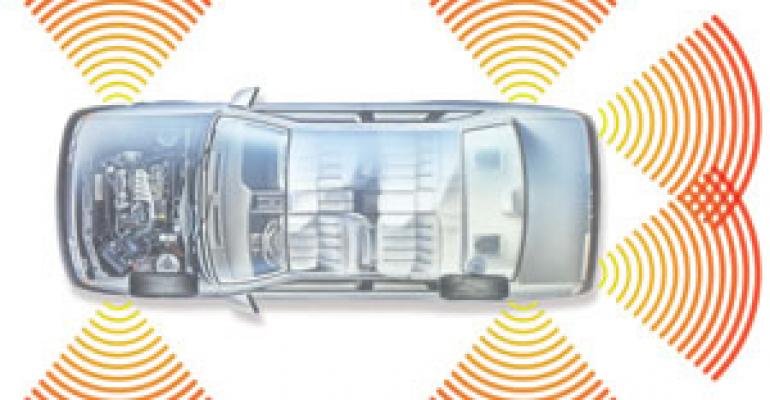 The AC1000 system is expected to be ready for production by 2015 and is being developed at the supplier’s technical center in Brest, France.

“Our new radar concept is a landmark in Driver Assist Systems technology – with a limited number of low-cost sensors independently reporting data to a central control unit, enabling a wide range of safety functions to be managed efficiently and intelligently,” Martin Thoone, TRW’s vice president-electronic engineering, says in a statement.

What the device can’t do is support adaptive cruise control. For that, a separate 24 GHz or 77 GHz radar system is needed in the grille to lock on to the vehicle ahead and maintain a safe trailing distance.

TRW is a leader in ACC and has been marketing its technology for a decade. However, take rates for the technology remain low, limited primarily to expensive luxury cars.

The Livonia, MI, supplier expects demand for the short-range radar system to be more robust because it can be used for multiple applications on a broader range of less-expensive vehicles. For instance, an auto maker could start with basic driver-assist functions but upgrade them in the future.

TRW says a basic system could comprise a single forward-looking sensor for low-speed collision warning; a mid-level system could add a pair of rear-mounted radar devices for blind-spot detection and lane-change assist; and a premium system could add sensors for traffic-jam assist or side-impact detection or be used as part of an automated parking system.

One of the world’s largest brake producers, TRW also is developing in Koblenz, Germany, its next generation of advanced modular brake systems, which is vacuum independent, can enhance functionality and allow for full blending for all regenerative brake system architectures.

TRW was among the first to deliver full electronic stability control to support regenerative braking with the introduction of its Slip Control Boost system in 2007 for General Motors’ 2-mode hybrid SUVs and later for the Chevrolet Volt and Opel Ampera extended-range electric vehicles.

The Future Brake System, as it currently is known within TRW, will use pedal simulation and mechatronic brake boost but will be up to 9 lbs. (4 kg) lighter and eliminate some components to reduce cost.

On the facilities side, TRW will open or expand 11 plants by 2012, including an occupant safety and braking facility in Wuhan, China; an aftermarket friction plant in Qingdao, China; and a slip-control system and actuation plant in Queretaro, Mexico.

This year, the company expects to increase research and development expenditures $80 million compared with 2010 and recruit some 500 engineers at technical centers worldwide, says John Plant, TRW chairman, president and CEO.