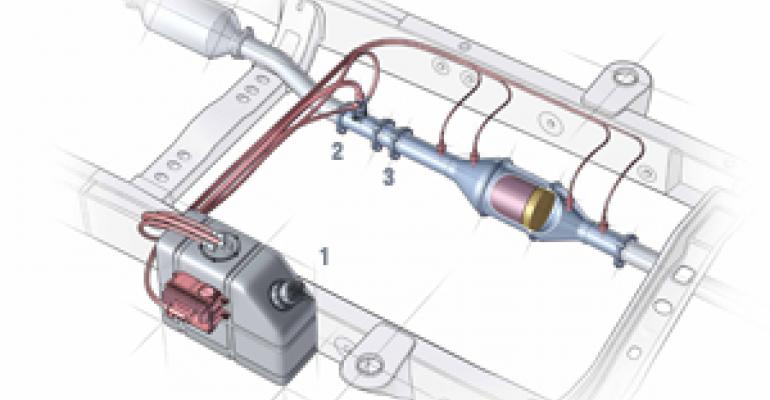 The supplier sees exhaust manifolds fabricated from stainless steel replacing cast-iron units, which are twice as heavy. Tenneco has launched several programs within the past year. FRANKFURT – It’s taken some 20 years, but cast-iron exhaust manifolds on gasoline engines are being replaced by lighter fabricated stainless steel manifolds, especially in China and Europe.

Within the past year, Tenneco has launched its first four fabricated manifolds for diesel-engine programs in Europe, and there’s plenty of interest among other potential customers, Jackson tells WardsAuto.

In North America, as gasoline direct-injection engines gain popularity, so are fabricated manifolds. Tenneco’s first fabricated manifold for the U.S. is for an unidentified hybrid-electric vehicle. “We’ll let our customer announce that,” he says.

The biggest driver behind the switch is reduced weight, which translates directly to improved fuel efficiency. A fabricated manifold is up to 50% lighter than a cast-iron module.

“Most auto makers have set a target to be 220 lbs. (100 kg) lighter on their next-generation cars,” he says. “Tenneco can bring 8% or so of that total number just with our emissions designs.”

Fabricated manifolds have been slightly more expensive because they use austenitic and ferritic grades of stainless steel that can be hydroformed, stamped, welded and brazed to endure high temperatures. Occasionally, the material is arrayed in a dual-wall construction.

Jackson says fabricated manifolds cost only slightly more than cast-iron units, but he considers them cost-neutral from an overall system standpoint.

“Tenneco’s breakthrough brings the cost down where the value proposition is finally right for diesel engine makers,” Jackson says, pointing to improved economies of scale and refined manufacturing processes.

Tenneco doesn’t produce cast-iron manifolds, so the addition of fabricated modules represents incremental growth. The supplier produces them in Europe, China and South America and, as of 2013, North America. Equipment already used for exhaust manufacturing also can be used to fabricate manifolds, Jackson says.

Cast-iron manifolds have proven their durability and effectiveness, but they are heavy and must be machined so air flows through unimpeded.

“As smooth as you try to make the internal passages, they can’t possibly be as smooth as a precision piece of sheet metal,” Jackson says.

He says a fabricated manifold offers better flow characteristics and warms up faster at engine startup.

Another benefit is the ability to integrate a turbocharger housing or an exhaust-gas recirculation valve within a fabricated manifold.

At the auto show here, running through Sept. 25, Tenneco is displaying a module with an integrated dual-scroll turbocharger – supplied by an unnamed partner – to boost performance and fuel economy.

“A turbocharger in most basic terms converts heat into horsepower,” Jackson says. “It takes heat out of the exhaust gas and charges the intake air for the cylinders.

The quicker you can get heat to the turbocharger, the more efficient the engine will become.”

Because a fabricated housing has a much lower thermal mass, “you’re not absorbing heat like you would in a cast-iron manifold,” he says. “So that heat can pass much more quickly straight into the turbocharger so you get reduced lag and higher turbo efficiency. And you can go to a smaller-displacement engine with greater boost and get greater efficiency and performance.”

Although most applications for fabricated manifolds for diesel engines are occurring in the passenger-car market, Jackson says Tenneco is talking with commercial-vehicle producers interested in the technology to deal with upcoming fuel-economy mandates.

Some new engines are coming to market without an exhaust manifold bolted to the cylinder head. Instead, the functions of the manifold are integrated within the head, channeling exhaust gas directly from the ports to the exhaust system.

Jackson says few customers express interest in engine designs of this nature, and that a fabricated manifold will achieve similar benefits, for less money.

“What customers want is thermal management,” he says. “In the regulatory world, you’re always getting there in the way that offers you the lowest cost and the highest reliability.”

Also at the show, Tenneco is displaying an exhaust manifold that integrates both a turbocharger and hydrocarbon injector, which is necessary to spray additional fuel to regenerate the diesel particulate filter periodically.

Often, this injector is placed in the exhaust pipe, downstream of the turbocharger.

“We inject hydrocarbons (fuel) directly into the fabricated manifold; it passes through the turbocharger; you get complete mixing of that,” Jackson says. “And then you can combust it most efficiently in order to regenerate the particulate filter.”

The result, which Jackson considers a breakthrough, is the need for less fuel to regenerate the particulate filter, which means better fuel economy and reduced carbon-dioxide emissions, in the neighborhood of 0.5%.

Also on the diesel front, Tenneco displays its XNOx selective catalytic reduction system, which can deliver better than 95% efficiency in eliminating oxides of nitrogen. The process uses a proprietary return-flow fuel injector and chemical reaction to convert NOx from a toxic emission into harmless nitrogen and water.

Another Tenneco technology to boost fuel economy and improve cabin air temperature is a heat-recovery module that plugs directly into the exhaust system.

In winter, the device uses engine coolant recirculating through the exhaust stream to pick up waste heat and warm the engine more quickly at startup, which improves occupant comfort and reduces cold-start emissions.

“This will get you heat within 30 seconds after an engine start,” Jackson says.

In summer, the heat exchanger can be bypassed, to prevent additional heat from reaching the cabin.

He says the technology will be ready for production within two years.