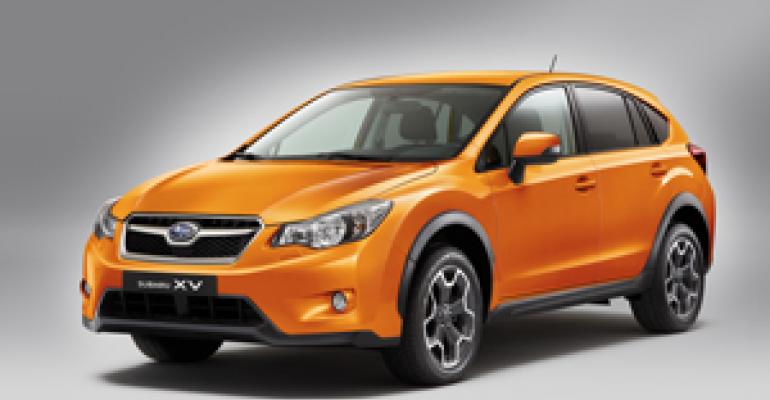 FRANKFURT – Subaru’s cycle plan includes one new production vehicle in each of the next four years, a 2014 concept car and a high-torque continuously variable transmission capable of mating with a new diesel engine and a direct-injection turbocharged version of its new 4-cyl. boxer engine.

The strategy was presented by Toshio Masuda, Subaru senior general manager-product planning, to select journalists, including WardsAuto, at the Frankfurt auto show, which runs through Sept. 25.

The mid-term management plan is dubbed internally “Motion-V,” extending from 2011 to 2015 and targeting a 30% fuel-economy gain in each vehicle segment, compared with 2010 levels.

In breaking down that gain, Masuda says 20% will come from engine and transmission improvements, while the remaining 10% will be tied to body and chassis technologies.

In addition to the forthcoming unnamed vehicles, Subaru is introducing a new Impreza compact car, which arrives in U.S. showrooms in November with an all-new 148-hp naturally aspirated 2.0L boxer engine, tentatively rated at 27/36 mpg (8.7-6.5 L/100 km) in city/highway driving.

With the new Lineartronic CVT, Subaru says the ’12 Impreza will be the most fuel-efficient all-wheel-drive car in the U.S.

Also at the auto show, Subaru unveils the production-ready XV compact cross/utility vehicle, which goes on sale next year in Europe and Japan and likely in 2013 in the U.S. A concept version of the XV debuted in April at the Shanghai auto show.

Subaru is entering the C-segment CUV market late but is counting on the standard symmetrical all-wheel drive as a key selling point, along with a lightweight chassis, high ground clearance and good maneuverability.

Three engines will be offered in the European market, all of them 4-cyl. boxers with dual overhead camshafts and four valves per cylinder. Each engine complies with Euro 5 emissions standards.

Subaru has not said which engine or engines will come to the U.S. in the XV.

Masuda says Subaru will introduce a Euro 6-compliant boxer diesel engine within four years, and that a hybrid-electric vehicle, fully designed and engineered by Subaru, will launch in Japan in 2013.

Subaru also reveals the name of its upcoming rear-wheel-drive sports car: the BRZ, which stands for Boxer, Rear-drive Zenith.

Developed jointly with Toyota, the BRZ will roll off Subaru production lines in Japan’s Gunma prefecture in spring 2012. The production vehicle will be unveiled at the Tokyo auto show this November.

The BRZ, a 2+2 coupe, will be powered by a sportier naturally aspirated 2.0L “FA” boxer engine derived from the FB.

Subaru has embraced the boxer layout since its 1000 sedan arrived in 1966. Since then the auto maker has produced 11.7 million boxer engines.

The all-new third-generation “FB” boxer arrived in the U.S. last fall – a 2.5L unit that produces 170 hp in the Forester CUV. The engine is directly related to the 2.0L version rolling out soon in the new Impreza.

After a new Impreza will come high-powered WRX and STI variants. The product cycle confirms a turbocharged direct-injection boxer will arrive in 2012, and Masuda says the goal is to achieve 300 hp in the top application, as well as better fuel efficiency.

The STI, ever popular with young sports-car enthusiasts, always has had turbocharged engines.

Masuda says the “Motion-V” strategy allows Subaru to maintain its sporty brand character while becoming a leader in fuel efficiency.