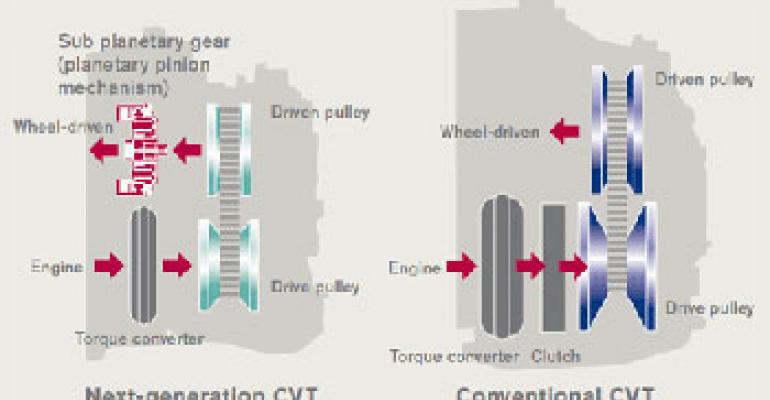 The new continuously variable transmission has an auxiliary gearbox with a sub-planetary gear for a broad ratio of 7.3:1. It also is smaller and lighter than the unit it replaces. Besides being 10% smaller in size compared with ’11 Versa’s CVT, the new unit also is 13% lighter and cuts friction 30%.

The new transmission has an auxiliary gearbox with a sub-planetary gear, for a broad 7.3:1 transmission ratio, besting most competitors’ CVTs and some step-gear automatics, Nissan claims.

“So you actually have a clutch between the driven pulley and the planetary gear, which will engage/disengage as you’re driving to give you that better ratio,” he says. “Otherwise, we would have had to have a driven pulley that’s too big for this transmission.”

Dominique says the “rubber-banding” associated with CVTs – high engine-revving accompanied by slow acceleration – has been resolved.

“The newer generation is so smooth, the engagement is so strong and the movement up and down the cones is so precise that some of the concerns people had with rubber-banding seem to be going away,” he says, reporting good initial feedback from those who have driven the CVT-equipped ’12 Versa sedan.

Nissan utilizes CVTs at a far higher rate than any competitor. Ward’s ’10 U.S. domestic-car installation data shows 480,123 ’10 Nissan Versa, Sentra, Altima and Maxima passenger cars were equipped with a CVT, accounting for more than three-quarters of all ’10 passenger cars that featured the technology.

“Years ago I would have told you there’s a tremendous cost disadvantage,” Dominique says of the disparity between automatic transmissions and pricier CVTs. “I think that cost disadvantage is going away.”

Nissan expects its CVT volume to increase as the auto maker migrates the technology to other models. New versions of the Sentra compact and Altima midsize sedans, which currently features CVTs, are due next year.