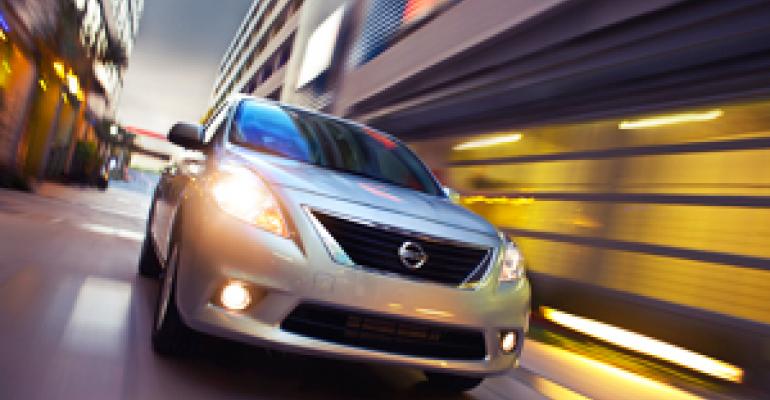 The redesigned &#8217;12 Versa will arrive in U.S. showrooms in August only as a sedan. But the auto maker&#8217;s top North American product planner says the &#8217;12 hatch will be carried over from prior model-year. SEATTLE – Nissan appears to be tempting fate by launching the all-new Versa without a hatchback version, which helped make the trendy vehicle the U.S.-market’s top-selling B-car.

The redesigned ’12 Versa, which goes on sale in August, will arrive in U.S. showrooms only as a sedan. But the auto maker’s top North American product planner is unfazed, noting the ’12 hatch will be carried over from prior model-year.

“It just happened to be when the first generation was developed, (the Versa sedan and hatch) were developed concentrically,” Larry Dominique, vice president-product planning for Nissan North America tells Ward’s here during a recent Versa media event.

“This next-generation, we did the (foreign-market) March/Micra first,” he says, referring to a pair of overseas-market platform-mates. “The (Versa) sedan comes second and the hatchback comes third.”

However, Dominique maintains a fresh, new 4-door only can help.

The new-generation Versa sedan features a de-contended interior, with minimal soft-touch trim. It also has an upgraded powertrain.

“You don’t need a lot of soft-touch material – it’s not prevalent in the segment,” Dominique says of the hard-plastic interior. He notes the previous-generation Versa sedan was derived from the more upscale European-market Nissan Tiida. “This generation, we have a lot of the same interior parts (globally).”

Nissan invested in powertrain technology, replacing the ’11 Versa’s two engines – a 1.6L I-4 in the S grade and a 1.8L 4-cyl. engine in the SV and SL trim lines – with a two-injectors-per-cylinder 109-hp 1.6L I-4. Dominique says the technology is not as expensive as the gasoline-powered, direct-injection engine featured in Nissan’s pricier Juke cross/utility vehicle.

The 1.6L I-4’s two injectors create a spray that is wider and 57% finer, compared with a single fuel injector, the auto maker says. The result is better swirl and combustion.

The new sedan’s width is the same as the outgoing model, but its height is reduced while featuring a larger rear overhang to lend proportions more closely associated with U.S.-market cars.

While its highway performance doesn’t match that of other subcompacts, notably the new 40-mpg (5.9 L/100 km) Hyundai Accent, Dominique is unconcerned about the “buzz” surrounding that number.

Many subcompacts achieve 40 mpg only with an optional fuel-economy package, he notes. “You divide (the additional cost) over five or six years of ownership; that has a payback of about never.”

The projected combined fuel-economy rating of the base S-grade Versa with a 5-speed manual gearbox is 30 mpg.

Nissan is targeting buyers who are 25-29, single with no children and have an annual household income of $55,000.

The base model includes air conditioning and a radio, unlike the previous Versa S sedan. The price is bumped to $12,760 for a CVT-equipped S with a high-efficiency alternator. A $350 cruise-control package is optional.

The Versa SV, which Nissan expects to continue as the top-selling grade, is $14,560. It has power windows and remote keyless entry, plus better seat cloth and a chrome grille surround and exterior door handles.

A $700 tech package for the SL grade has Nissan’s low-cost navigation system by Bosch, as well as XM Satellite Radio and a USB port.

Destination and handling for the ’12 Versa sedan is $760. Nissan is mum on sales expectations for the new subcompact 4-door, saying only it hopes to retain its leadership while increasing sales.

The Versa is assembled at Nissan’s Aguascalientes, Mexico, plant.