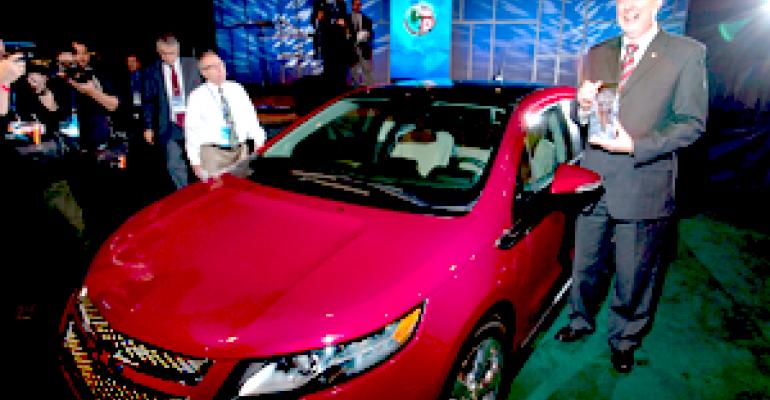 In the most recent testing earlier this month, NHTSA did not crash entire vehicles, just the battery packs and their coolant systems. “I’ve spent my entire career performing extensive and severe tests, (and) we need to be doing those sorts of things,” says Stephens, a 42-year GM engineer and executive currently serving as global chief technology officer. He leads development of advanced technologies for integration into GM vehicles.

Stephens ushered the ground-breaking Volt to production last year as the auto maker’s product chief, a role now carried out by Mary Barra. His comments come in the wake of additional NHTSA testing earlier this month of Volt battery packs that sparked fires.

The regulatory agency was trying to replicate an exercise it conducted in May as part of its new-car assessment program, when testers crashed a Volt and its damaged battery pack started a car fire a few weeks later.

In the most recent testing earlier this month, NHTSA did not crash the entire vehicles. Instead, it crashed just the battery packs and their coolant systems.

One battery pack survived without incident and the second sparked but self-extinguished. A third pack caused a fire days later, prompting GM on Monday to make loaner cars available to current Volt owners until the auto maker and NHTSA finalize a post-crash protocol for handling damaged Volt battery packs.

But NHTSA’s testing, part of a newly opened formal safety-defect investigation of the Volt, raised some eyebrows for the unusual lengths the regulator took to determine whether an unreasonable risk faces either Volt owners or emergency personnel responding to a crash involving a lithium-ion battery-powered EV.

The Volt uses a 16-kWh lithium-ion battery as the backbone of its propulsion system.

“In each of the battery tests conducted in the past two weeks, the Volt’s battery was impacted and rotated to simulate a real-world, side-impact collision into a narrow object such as a tree or a pole followed by a rollover,” NHTSA says in its Nov. 25 statement about the testing procedure.

NHTSA says in an email to WardsAuto today it stands by its earlier statement that “testing on electric vehicles to date has not raised safety concerns about vehicles other than the Chevy Volt.”

GM itself strove to make the Volt safe by optimizing the vehicle’s structure to protect the battery in a crash. GM and LG Chem also spent millions of engineering dollars to ensure the battery pack’s chemistry remains stable under severe temperatures and collisions.

Barra told journalists in a conference call Monday announcing the Volt loaner program that GM is “very confident” in the Volt’s battery chemistry. She also says GM sends its engineers into the field to investigate Volts involved in crashes.

But on-site evaluations have been few because not many crashes have been severe enough to trigger the vehicle’s airbag, which is the barometer GM uses in deciding whether to mobilize engineers.

The auto maker has tasked the Volt with remaking its post-bankruptcy image. The plan has worked so far, drawing new customers to Chevrolet dealerships and spurring sales of other fuel-efficient cars from the auto maker such as the Chevy Cruze and Malibu.

NHTSA also wants to polish its image to regain the trust of auto makers, car buyers and Washington lawmakers after it was perceived to have dragged its feet over Toyota’s sudden acceleration dilemma in 2009.

GM, which sold 5,005 Volts through October, according to WardsAuto data, complains it has been hampered by supply constraints. Earlier this month, the auto maker decided to bolster sales by allowing dealers to sell their demonstration models, which they are required to stock before they can receive retail units.

A total of 5,329 Volts have been sold since the car was launched late last year. So far, a “relatively small number” of those owners have taken GM up on its loaner offer, spokesman Rob Peterson says.