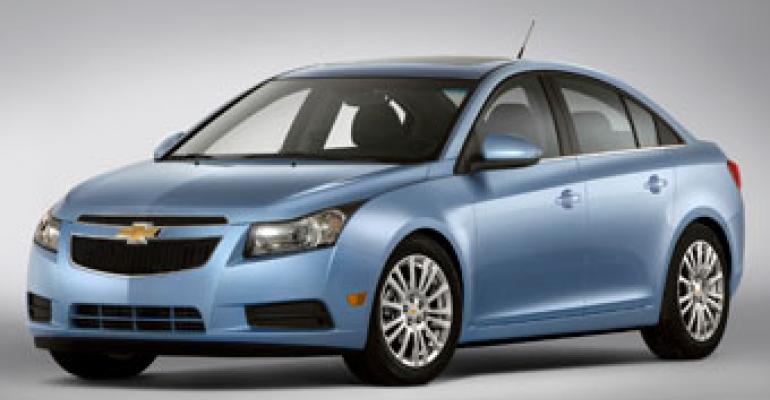 Plans call for the Cruze diesel coming in 2013 to achieve fuel economy in the range of 50 mpg, company insiders tell Ward&#8217;s. General Motors thinks a sizable segment of U.S. car buyers want more than just fuel economy from a diesel engine, making the business case for an oil-burner in the Chevrolet Cruze when the nameplate already has the high-mileage Eco variant in the market.

GM also confirms the diesel engine planned for the Cruze is the 2.0L currently on sale in Europe. Ward’s first reported GM’s plans for a diesel-powered passenger car last year.

The auto maker already markets the Cruze Eco, a gasoline variant of the popular compact car achieving through mostly aerodynamic and transmission tweaks 42 mpg (5.6 L/100 km) on the highway, according to the Environmental Protection Agency.

Having a pair of fuel-sippers under the same nameplate recalls GM’s unsuccessful mild-hybrid Chevy Malibu and Saturn Aura. The cars flopped because 4-cyl. models achieved equivalent fuel economy and cost less, which meant consumers clearly were buying with an eye on pump prices, not necessarily environmental stewardship.

The 2.0L turbodiesel GM sells in the Chevy Cruze in Europe comes mated to either a 5-speed manual transmission to achieve 42 mpg in the European combined test cycle or a 6-speed automatic for a 35 mpg (6.7 L/100 km) rating. A version with the manual gearbox tuned for optimum efficiency reaches 43 mpg (5.5 L/100 km).

Charlie Klein, director-global mass, energy and aerodynamics at GM, tells Ward’s at an industry conference the auto maker thinks a diesel Cruze will be a hit because it will use the automatic transmission favored by Americans.

“Chevrolet has a great price-point vehicle that has tremendous eye appeal and options but may not meet the performance needs of a select market group,” he tells Ward’s.

A diesel version would hit that group between the eyes by adding a sturdy engine, extra torque and top-end performance to the mix, he says.

“It’s a win for Chevy and it’s a win for consumers wanting the best of both worlds, performance and reasonably good fuel economy without an unusually high penalty on the fuel budget – all while satisfying their other desire to purchase an American-brand vehicle.”

GM North America President Mark Reuss would agree. “We’ve got a good car,” he tells journalists at a recent industry conference. “We wouldn’t be having this conversation if we didn’t have a good car.”

But consumers still will have to look beyond the price at the pump, where diesel fuel has been averaging between $0.20 and $0.30 a gallon more than gasoline.

Diesel can be difficult to find. About 50% of U.S. filling stations carry the fuel. And diesel also is equally susceptible to spikes, evidenced by a $0.70 premium over gasoline in July 2008 when prices set records.

“People often tell me, ‘Hey, I bought a diesel because I’m cheap,’” says Allen Schaeffer, executive director at the Diesel Technology Forum, a group backed by makers of diesel-engine technology such as Bosch. “Diesels provide long-term benefit and value,” he says.

GM sees just one volume player in the diesel passenger-car segment. About 39% of Volkswagen Jetta buyers in the U.S. pick the optional 2.0L 4-cyl. TDI.

“Look at the number of diesels our competition sells in that class; it’s not small,” Reuss says. “So there are people out there who like diesel, no matter what, for the performance and efficiency.”

Diesel engines currently comprise about 3% of all U.S. light-vehicle sales, according to Ward’s data.

Bosch estimates diesel technology pays for itself within 18 months of purchase, due to fuel savings and less maintenance. Greenhouse-gas emissions are 20% less than gasoline because of diesel’s greater efficiency, the supplier says.

Surprisingly, buyers cite functionality, or power, performance and capability, as the No.1 reason for choosing a diesel, according to Schaeffer’s data. That’s ahead of fuel economy and environmentalism.

“People are thinking more about how they invest their transportation dollars,” he says.

For Reuss, diesel power makes good business sense in an era of volatile fuel prices and an unpredictable economy. “It is a really good hedge against the unknown,” he says.