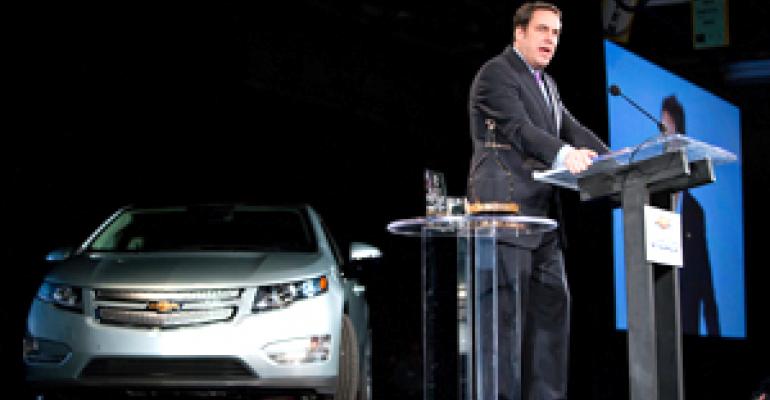 Volt owners will get a free loaner car until a post-crash protocol is devised for regulators and first-responders. GM also is pondering ways to make the car&#8217;s battery pack &#8220;more robust.&#8221; Federal investigators were never instructed to “de-power” the Chevrolet Volt’s battery following crash-testing, an omission that contributed to a pair of fires.

“When electrical energy is left in a battery, it is similar to leaving gasoline in a fuel tank that has been damaged,” Mary Barra, senior vice president-global product development, says today in a conference call with journalists. “It is important to drain that energy so it does not cause any type of risk, especially for fire.”

GM’s in-house crash-tests of the Volt went off without a hitch because the auto maker routinely takes steps to safely remove and dispose of the damaged power supply. But the auto maker did not apprise the U.S. National Traffic Safety. Admin. of this protocol, which now is being remedied as part of a broader program to reassure some 5,300 Volt buyers.

Volt owners will get a free loaner car until GM determines a post-crash protocol instructing regulators and first-responders to de-power the car’s battery and reduce fire risk.

Two cars tested recently by the National Highway Traffic Safety Admin. caught fire after testing. One took a week to kindle, and the second sat idle for three weeks before a fire occurred. The battery pack of a third car NHTSA crashed smoked but extinguished itself.

No real-world fires have been reported, but the post-crash-test fires have prompted an investigation by NHTSA. GM says it is working with the agency on determining a protocol for handling the battery pack after a crash.

No glitches have been linked to the European-market Ampera, the Volt’s Opel-brand mechanical twin now in launch phase. “We have not been contacted by any regulators outside of the U.S.,” Barra tells WardsAuto.

The auto maker intends to keep selling the vehicle in the U.S. as it develops the post-crash protocol. Deliveries to international customers have not begun. International safety regulators have not inquired about the Volt, which has earned the highest U.S. and European crash-safety ratings.

“The car is safe,” Reuss tells journalists, adding he owns one that his daughter drives. “I believe in it.”

Reuss claims the Volt is safer than a vehicle powered by an internal-combustion engine because it poses no “immediate” fire risk. The problems reported in connection with the Volt represent “post-crash activity.”

GM says a handful of real-world crashes have occurred, but none was as severe as the NHTSA tests and did not require de-powering the battery, a process the auto maker’s engineers compare with plugging a giant light bulb into the battery pack to drain its juice.

Barra says the Volt will not undergo a significant redesign to accommodate the coming post-crash protocol but adds, “We are looking at some promising avenues to make the battery pack more robust.”

GM’s crash-testing prior to Volt’s launch late last year did not reveal the potential for a battery-pack fire because the auto maker took steps to safely remove and dispose of the damaged system.

The first NHTSA fire occurred in May. The other two incidents happened just a few weeks ago during a follow-up investigation.

Two other Volts were burned during residential fires this year, although inspectors determined the car was not the cause both times.

GM has made the Volt a cornerstone of its bounce-back from bankruptcy and the plan has worked so far, drawing new customers to Chevy dealerships and spurring sales of other fuel-efficient cars from the auto maker such as the Chevy Cruze and Malibu.

Volt sales have been hampered by supply constraints, causing GM to take the unusual step this month of allowing dealers to sell their demonstration models.

Barra says issues of EV safety are not exclusive to the Volt. Other auto makers and the Society of Automotive Engineers are jointly pursuing such research.

“We take enormous pride in the Volt and what it represents, a new era of electric vehicles,” she says. “And we will take every precaution to assure our customers and the public of our total commitment to safety of anyone who drives the Volt.”