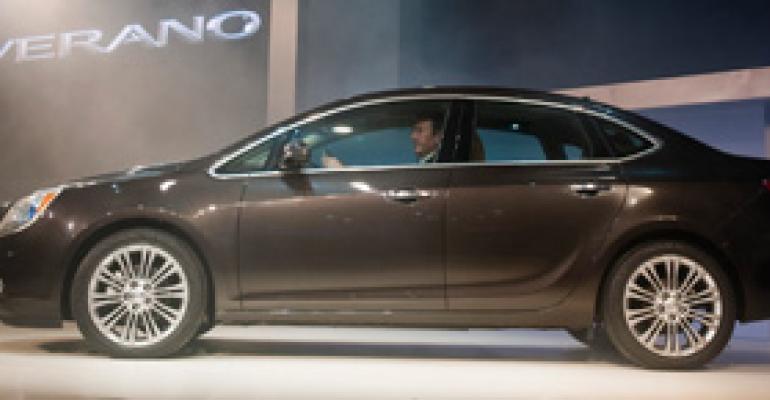 Buick&#8217;s marketing chief stops short of saying a trend has emerged at the auto maker for uncovering sparsely populated segments and storming in with global gusto.

The auto maker will do the same with the recently announced Chevrolet Cruze diesel, which arrives in 2013 aimed at a U.S. compact-car segment solely held by Volkswagen.

Tony DiSalle, vice president and marketing chief at Buick, stops short of saying a trend has emerged at the auto maker for uncovering sparsely populated segments and storming in with global gusto.

“I can’t speak for GM generally,” he tells Ward’s during an event here touting the Verano’s low noise, vibration and harshness levels, “but the spirit of this vehicle and its assignment is to play in the premium segment above compact, and it is one that is fairly vacant.”

The auto maker believes the Verano could have company soon, though. Acura wants to play in the segment after dropping its smallest car, the RSX coupe, in the ’06 model year. So far, Acura officials have denied the Canada-specific CSX as a candidate, because “it’s just a rebadged Civic,” one of them says.

The Buick Verano shares its global compact-car architecture with the recently launched Chevy Cruze, but GM engineers say the two cars occupy different galaxies. The Verano owes more of its lineage to the Buick Excelle sold in China and the Opel Astra in Europe.

“Different ends of the spectrum,” Gary Altman, chief engineer on the Verano, says of the small Buick and the Cruze. “The Cruze does very well for what is asked in the compact segment. The Verano would be much more luxurious.”

GM does not reveal Verano pricing, choosing to wait until the car’s end-of-year launch from its Orion Twp., MI, assembly plant.

DiSalle also plays demographics close to the vest. “We see customers largely driven by their life stage,” he says. “Perhaps a young professional moving up into a luxury car, a young couple with one child or empty-nesters.

DiSalle agrees timing is on the Verano’s side, given the new financial sobriety among car buyers coming out of the recession. Buick wants to be perceived brand-wide as the maker of accessible luxury.

“The timing is absolutely perfect for this luxury vehicle to come in; right-sized and thoughtfully styled,” he says.

Initially powered by GM’s 2.4L direct-injection 4-cyl. engine, a Ward’s 10 Best Engines winner, the Verano will add a sportier 2.0L turbocharged DI engine sometime next year. GM does not elaborate on the turbo, but expect a bump in output from 180 hp in the 2.4L to about 220 hp with the 2.0L.

Engineers added sound-deadening technology, such as a 5-chamber engine intake where most cars usually get just two, to quiet breathing from the 2.4L DI.

Heavy acceleration on the proving-ground test track here conjures pleasant feedback from the little engine. It won’t be mistaken for a high-output V-6 anytime soon, but engineers promise more tuning to the exhaust for further refinement.

The auto maker also uses acoustic laminated windshield glass and side glass, as well as double insulation to the inside door panels, to block out road noise. Door seals are triple sealed.

In a demonstration, GM runs a leaf blower alongside the Verano, and the car manages to keep the high whine at bay.

Liquid-applied sound deadener is added in strategic spots on the body-in-white, and chassis components are isolated to reduce vibration over rough surfaces. The car uses about 60% high-strength steel to form a solid foundation for high torsional stiffness.

Matt Purdy, a GM performance engineer, admits most of the Verano’s NVH inhibitors are fairly common. “But what’s not common is how much we’re throwing at it,” he says.

GM estimates the NVH technology adds upwards of 30 lbs. (13 kg) to the vehicle compared with its Excelle twin, but the extra weight is the price it pays to meet the luxury expectations of North American consumers.