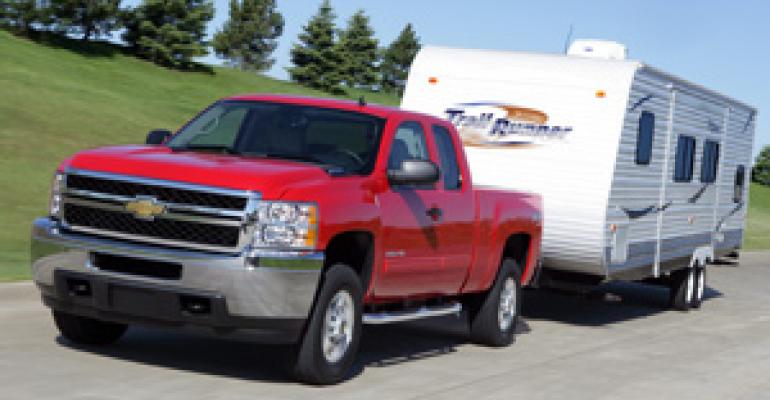 He also says the next-generation models of the large GM pickups could leverage a suite of performance enhancements to match or surpass Ford.

Ford trucks with direct-injection EcoBoost engines command more than 40% of the mix. In recent history, GM’s V-6 option never has taken more than 10% in a model year, WardsAuto data shows.

However, GM controlled 39.2% of the fullsize-pickup market through August, while Ford held 37.2%.

“We’re not seeing a negative impact on our share,” Chevrolet U.S. sales chief Alan Batey said in a conference call to discuss GM’s August sales, a month in which the Silverado posted its best performance since December 2010.

But with strong demand for Ford’s V-6 EcoBoost, which is a big risk paying early dividends in a market dominated by big-displacement engines and ongoing high fuel prices, the Dearborn auto maker believes it has found a competitive advantage.

Ford sales officials expect take rates for the EcoBoost will go higher, evidenced by dealer overall demand for V-6 engines rising to 60% of orders in August.

“They’ve done very well with the EcoBoost, no doubt about it,” Perry tells WardAuto in an interview. “But look at the numbers vs. our V-8. The miles-per-gallon aren’t significantly better.”

The EcoBoost maximum torque arrives earlier, at 2,500 rpm, compared with 4,400 rpm on the Silverado, and it trumps the GM V-8 in payload and towing.

“(Ford has) done a good job of marketing the EcoBoost, and that’s a challenge on our side to make sure that consumers understand you can get similar mpg out of a V-8 Silverado without sacrifice,” Perry says.

That task arguably will grow easier after the redesigned Silverado and Sierra hit showrooms in 2013, as expected. Perry says GM has a suite of technologies at its disposal for the new trucks, citing turbo V-6 engines and the new eAssist mild hybrid rolling out in its car lineup.

GM’s Cadillac large sedan concept car, the Ciel, is powered by a 3.6L direct-injected twin-turbo V-6 making 425 hp and 430 lb.-ft. (583 Nm) of torque mated to a hybrid transmission with low-speed electric drive similar to the 2-mode hybrid unit in its trucks. Fuel economy estimates are not provided.

Asked if the engine might work in a truck application, Dave Leone, chief engineer for Cadillac, tells WardsAuto: “Very possible. It would work well in a lot of vehicles.”

A new, fuel-saving 8-speed RWD transmission comes from GM in 2011, as well, and would be expected in the truck portfolio.

GM also promises to update the 2-mode hybrid system, which currently delivers 20/23 mpg (11.8-10.2 L/100 km) city/highway in both 2WD and 4WD models. But the system sacrifices some capability and costs more.

“Every mile per gallon is going to matter,” he says. “Certainly, we’re going to look for any possible way to increase the fuel economy of our vehicles, including our fullsize trucks.”

Chrysler has said it plans to add its Pentastar V-6 engine to its fullsize Ram lineup as early as next year.