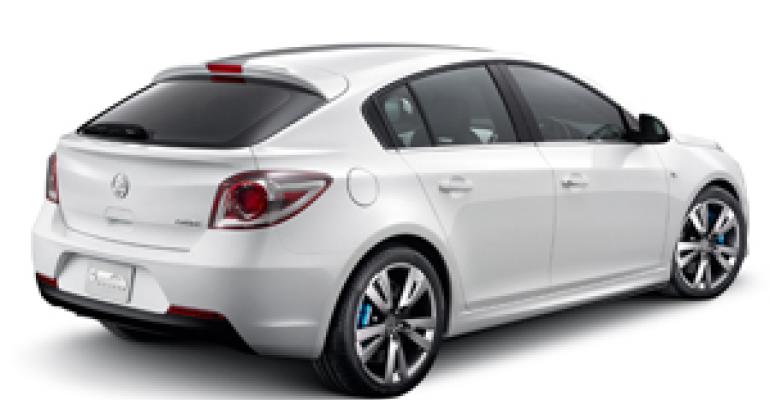 The Cruze hatchback is one of three new Holden models launched at the show as it revitalizes its lineup. The others are the Barina hatchback, Colorado pickup and LPG-powered Commodore. GM Holden debuts its Cruze hatchback at the Australian International Motor Show that runs through July 10, hand-built for the event by the company’s design team in Port Melbourne and adapted to give it an almost coupe-like appearance.

The General Motors subsidiary has high hopes for the hatchback, set to roll off the assembly line in South Australia later this year.

“We can’t wait for the Cruze hatch to go on sale,” Holden Chairman and Managing Director Mike Devereux says in a statement.

“(The) Cruze made it to No.1 in the small-car segment last month with only one body style (sedan), so we can’t wait to see how customers in a hatch market like Australia respond to the car.”

The GM Holden-designed hatchback already is on sale in the U.K. and South Korean bearing a Chevrolet badge after premiering at last year’s Paris auto show.

“We’re very proud of the finished product, our contribution to the global design program and that our Cruze hatch will be rolling off the Elizabeth assembly line and into dealerships later this year,” Devereux says.

The 5-door show car with its sweeping coupe roofline, short overhangs and wide stance make it appear planted and secure on the road, the auto maker says.

GM Holden designer Martin Love, a key player in the Cruze hatchback program, says the styling had to appeal to a broad range of customers to compete in the booming small-car market.

“When we designed the hatch, we needed it to be eye-catching and youthful, yet sophisticated, and still provide practicality, features and comfort families need,” he says. “We wanted to do something sporty and dynamic that would stand out against conventional hatchbacks.”

GM Holden is conducting its final pre-launch evaluation of the Cruze hatchback on Australian public roads and at the auto maker’s proving ground in Lang Lang, Victoria. Pricing, full specifications and features will be announced closer to launch later this year.

The Cruze hatchback is one of three new models in GM Holden’s product renaissance launched at the annual auto show being held in Melbourne this year as it revitalizes its lineup. The others are the all-new Barina hatchback and Colorado 4x4 pickup and a biofuels Commodore large car.

The 5-door Barina Spark subcompact, known as the Chevy Spark in other markets, has an Australian link through GM Holden’s Ondrej Koromhaz, who led its advanced design work while on international assignment with GM Korea.

“(The) Barina is one of Holden’s most important nameplates, and it will be a serious competitor in the light-car segment,” Devereux says. “The new global design highlights the depth of automotive design talent in Australia.”

“The next generation Colorado will be an important player in the light-commercial/pickup 4x4 segment, which is up 11% this year,” Devereux says.

He worked on the show-truck project for more than a year, collaborating with GM’s Colorado homeroom and design studio in Brazil, as well as teams in the U.S. and Thailand.

“Leading a show-car program is every young designer’s dream, so to get the opportunity to work on the Colorado concept for Australia has been amazing,” Last says. “It’s been a real learning experience and a huge team effort.

“We were given the scope to really push the boundaries and create a refined, yet rugged-looking vehicle that will hopefully whet people’s appetites for next year’s production model.”

Devereux says while the Commodore continues to dominate Australian large-car sales, GM Holden has to keep innovating to keep the big car on top and relevant to consumers.

“We’ll be adding to the Ecoline-model range, extending E85 flex-fuel capability to the popular 3.6L SIDI V-6 engine and launching a new dedicated LPG (liquefied-petroleum-gas) Commodore range to take advantage of the carbon-dioxide benefits of the locally abundant fuel,” he says.

“We have to be a serious threat to the competition in light cars, small cars, SUVs and LCVs, and we think with these new-generation products we will be.”

Devereux says the vehicles unveiled at the show highlight that GM Holden doesn’t just sell cars in Australia. “We invest hundreds of millions of dollars a year in our operations and people to make Holden one of the most important design and engineering centers in the GM world,” he says.

“Further into 2012, Australia will see more game-changing and segment-leading models, like the extended-range electric Holden Volt, an all-new midsize Holden Malibu and other exciting vehicles we’re not quite ready to talk about yet.”