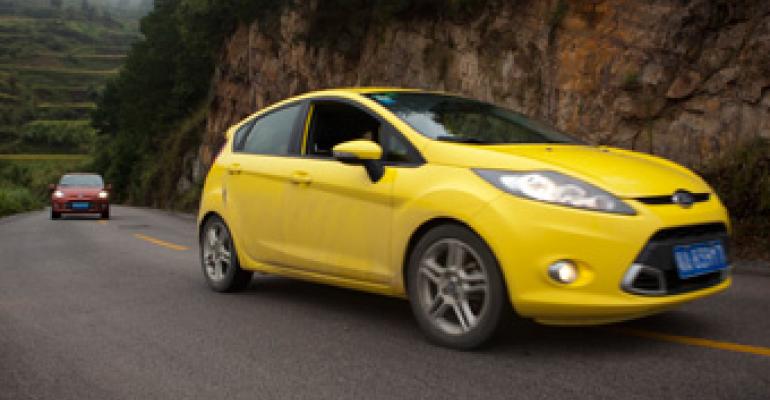 DEARBORN, MI – Ford’s aggressive foray into social media is a strategic move to surrender the iconic brand to the buying public, “Millennials” in particular, the auto maker’s top marketing executive says. Millennials are tech-savvy, 20-somethings who comprise the market’s second-largest cohort. They spend considerable time mingling on social-media portals, such as Facebook.

So Ford is going to shut up, he says, and allow the public to speak for the auto maker. Among the forums it will provide is a site on Google+, where “followers” can discuss Ford, its products and even pose questions to key executives.

Having launched its presence there July 1, Ford was the first and is, to date, the only auto maker in this space. Currently, it has more than 140 followers. “You’ve got to give the brand up to the people,” Farley says.

He makes his remarks at Ford’s proving grounds here, where the auto maker reaffirms its association with extreme motorsports, an activity that commands significant attention on the Internet.

A YouTube video featuring driver Ken Block performing stunts in a modified Ford Fiesta was among the website’s most-popular videos of 2010. As of today, it had been seen more than 33.4 million times.

The auto maker is hoping the association with such events, and the resulting buzz generated online, will endear the company and its products to Millennials.

“The brand isn’t want we say it is. It’s what our customers say it is,” Ford social-media guru Scott Monty says, adding forums such as such as Google+ give people a chance to assert natural tendencies.

“People want to be part of something bigger than themselves,” says Monty, a key cog in the Fiesta Movement, an online marketing campaign that helped launch the auto maker’s hot-selling B-car.

The entry-level Fiesta is resonating so intensely with Millennials, Farley dubs it “the most important Ford.”

With 42,129 deliveries through June, it is the top-selling car in the U.S.-market Lower Small car category, as defined by Ward’s segmentation.

Farley says Ford has increased its investment in motorsports, but declines to reveal numbers.

However, General Marketing Manager John Felice defends the spend, saying 39% of in-market new-vehicle shoppers regard themselves as motorsports fans and 50% of Ford motorsports fans report greater consideration of the Blue Oval when making purchase decisions.

While conventional motorsports franchises such as NASCAR and the NHRA remain important to Ford, Felice admits extreme motorsports,which comprise competitions such as off-roading and drifting , skews closer to Millennials in terms of demographics.

He also says motorsports no longer is regarded as an afterthought within the company. Rather, it is integrated, and executives charged with overseeing the activities are “part of the marketing team.”

Racing is “part of Ford’s DNA,” adds Jim Owen, Mustang brand manager, who reminds the auto maker got its start with funding that bubbled up from trackside.

In 1901, company-founder Henry Ford drove a car nicknamed Sweepstakes to victory at the Detroit Driving Club in Grosse Pointe, MI. Onlookers included investors who later approached the entrepreneur and gave him money used to start the company, Owen says.