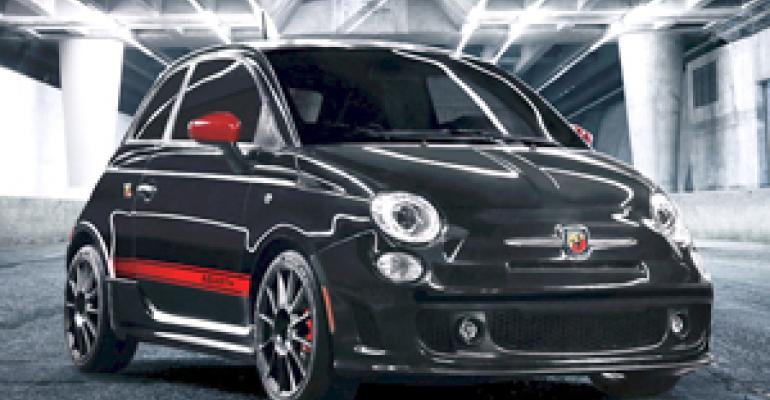 LOS ANGELES – Fiat chief Olivier Francois says the performance-oriented Fiat 500 Abarth combines with the Gucci edition of the car to provide the one-two punch needed to introduce the Italian auto maker to the American public.

“Italy is perceived in America as doing two things – fashion and performance,” he tells WardsAuto at the auto show here. “Gucci is a statement that we can have a small car that’s the best of Italy.

And Abarth is Italian performance, and that will help us with our statement.”

The Abarth is powered by a turbocharged application of Fiat’s 1.4L FIRE I-4 with MultiAir valve actuation that produces 160 hp and 170 lb.-ft (230 Nm) of torque.

The Gucci-inspired 500 features cues derived from the famous Italian design house, including its double-G logo on the hubcaps and on the head restraints.

The Abarth is due in dealerships in the first quarter of 2012, while the Gucci version arrives in December, Francois says.

The Gucci model will be priced at about $24,000 and the Abarth “should be more or less in the same area,” he says. “It will be a good value for the money.”

Francois admits “mistakes were done” leading to Fiat’s 1983 retreat from the U.S. market. But he doesn’t think this will affect the brand’s return.

Deliveries of the 500, which has been on sale in the U.S. since April, have been lackluster, totaling 15,826 units through October, according to WardsAuto data.

One reason for the slow sales pace is too few dealers, a situation that is on its way to being remedied, the auto maker says.

“When we started advertising in September, we didn’t have the right number of dealers,” Francois says. “Now we have 130 dealers, which is the number we wanted, and we’re still getting additions to that.”

Also among the remedies is the replacement of Laura Soave, Fiat’s top North American executive. She was replaced this week by longtime Chrysler executive Timothy Kuniskis.

While not revealing volume expectations, he does admit the A-segment in which the Fiat 500 resides is niche.

The next Fiat model to be introduced in the U.S. likely will play in a volume segment.

“We need to expand volume and feed dealers with something that can really sell,” Francois says, noting the 500 was chosen as the U.S. launch vehicle because of its iconic stature that helps define what the brand stands for. “We’re never going to go into real big cars or SUVs.”

Also helping build awareness of the brand in the U.S. is singer and actress Jennifer Lopez, who appears in a multi-faceted advertising campaign.

“Our communication is starting to resonate,” he says.