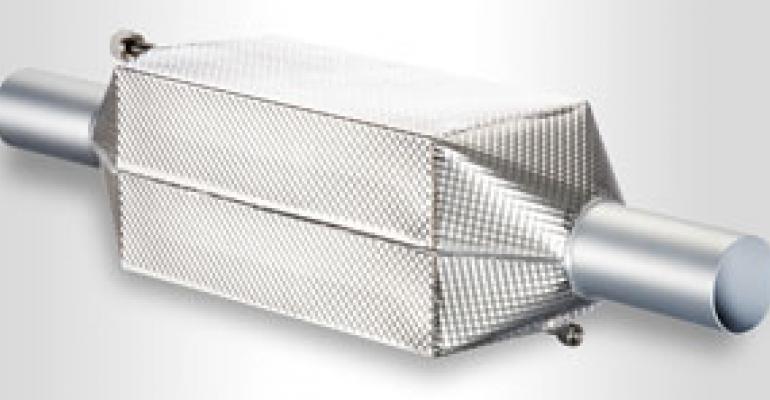 FRANKFURT – Heat is an unavoidable byproduct of internal-combustion engines, and exhaust-systems supplier Eberspaecher of Esslingen, Germany, has three ideas for capturing that heat and converting it to energy.

One of the technologies is a mini steam power plant designed to be plugged into the exhaust stream. Residual exhaust heats water within the unit until it vaporizes and drives a turbine blade. The resulting energy can be used mechanically or to generate electricity.

The device employs the Clausius-Rankine process, named after two physicists renowned for their work in steam generation.

One of those researchers, William John Macquorn Rankine, developed the Rankine cycle, the fundamental thermodynamic underpinning of the steam engine. The cycle generates about 90% of all electric power used throughout the world.

Eberspaecher says its system eventually could replace the alternator in the future, or at least relieve its load.

In a passenger-car application, the supplier says the potential power generation lies between 800 and 1,100 watts, which corresponds to a carbon-dioxide reduction of about 10 g/km.

The device is on display at the auto show here, as is a thermoelectric generator that converts residual heat from the exhaust system into electricity that is stored in the battery and can be used universally.

Sophisticated electronics use the temperature difference between the hot exhaust gas and cooler ambient air to produce electricity. The developers anticipate an energy yield of between 350 and 400 watts, as well as a CO2 reduction of about 5 g/km.

Eberspaecher also exhibits a latent heat accumulator that brings the catalytic converter up to operating temperature in seconds, eliminating the need for other, slower methods to heat the catalyst. The supplier says its accumulator can reduce CO2 emissions about 1 g/km.

And there’s another big advantage: Carbon monoxide and hydrocarbon emissions, which are released during a cold start, drop 95%.

Eberspaecher sees this as beneficial for hybrid-electric and extended-range electric vehicles that frequently switch between combustion and electrical mode and have a greater number of cold starts.

The basic principle of the latent-heat accumulator can be compared with that of a hand warmer, the supplier says. The residual heat from the exhaust system is stored in a “phase change material” and emitted to the catalytic converter as required.

The ideas may hold great potential, but don’t count on them for vehicle programs in the near future. Eberspaecher says the technologies should be ready within four to seven years.