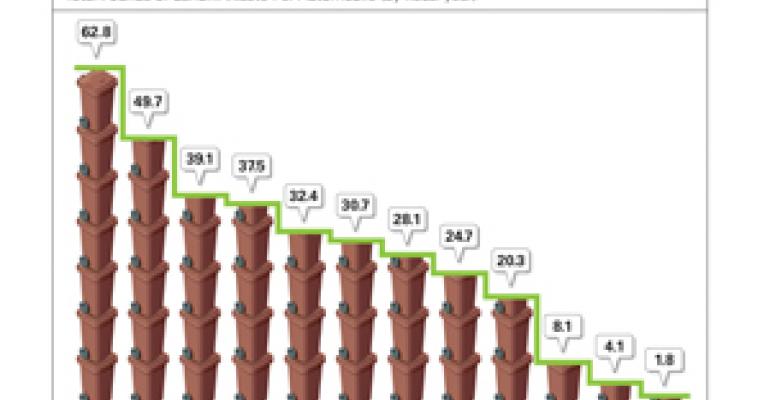 In the case of cafeteria waste, most Honda plants switched to washable dishware and disposing of solid waste through composting, recycling and energy recovery. The sight of auto workers crawling through dumpsters suggests tough times in the auto industry, but Honda of America Mfg. workers have been doing it for years to ferret out waste.

The auto maker says today that 10 of its 14 manufacturing plants in North America now send zero waste to landfills, and the remaining four dump only small amounts of paper and plastic trash from their cafeterias to landfills.

Considering that auto plants generate millions of pounds of offal every year, it is a significant accomplishment, and Honda gives much of the credit to its garbage-picking workers for eliminating 4.4 billion lbs. (2 billion kg) of waste material that would have been sent to landfills during the past 10 years.

Karen Heyob, a manager who oversees Honda’s green factory initiatives in North America, says the total amount of industrial waste the auto maker sends to landfills has dwindled from 62.8 lbs. (28.4 kg ) per vehicle produced in fiscal-year 2001, to an estimated 1.8 lbs. (0.8 kg) per vehicle in the current fiscal year.

To better understand where all the waste was coming from, Honda officials say teams of employees actually combed through dumpsters and piles of plant refuse to determine origins.

They identified and implemented hundreds of waste-reduction and recycling initiatives, from finding ways to reduce metal scrap in stamping processes to changing the ways parts were packaged to minimizing the use of paper and plastic in cafeterias.

Many of the recycling and waste-reduction activities were undertaken through programs where teams of Honda employees engage in an annual competition to improve Honda’s value to society, a spokesman says.

In the case of cafeteria rubbish, most Honda plants switched to washable dishware and disposing of solid waste through composting, recycling and energy recovery, which usually entails burning waste to generate electricity.

The only two remaining landfill waste streams in all of Honda’s North American production activities are paper, plastic and food trash from worker break rooms and cafeterias at the auto maker’s vehicle and motorcycle plants in El Salto, Mexico, and a byproduct of a paint pretreatment process for aluminum body panels at both the East Liberty and Marysville, OH facilities, Heyob says.

The cafeteria trash in Mexico is difficult to eliminate because disposing of it in a more environmentally responsible manner would require transporting it more than 1,000 miles (1,600 km), a Honda spokesman says.

All major auto makers are working to eliminate landfill waste and have ultra-green factories they brag about, but Heyob says Honda’s accomplishment is significant because of the high-percentage of engines, transmissions and stampings it produces in North America.

Volkswagen’s new plant in Chattanooga, TN, is ultra-green for instance, but it will be importing its engines and transmissions from overseas.

Engines and transmissions create tough environmental issues because they are comprised of big cast-metal parts that are molded in large-scale foundries.

Foundries generate huge quantities of what’s known as “foundry sand,” which is used in molten metal casting processes and usually sent to landfills.

However, Honda engine plants in Ohio, Alabama and Canada now are reusing virtually all leftover sand from casting operations, and recycled 9,400 tons (8,527 t) in just the 2010 fiscal year, Heyob says.