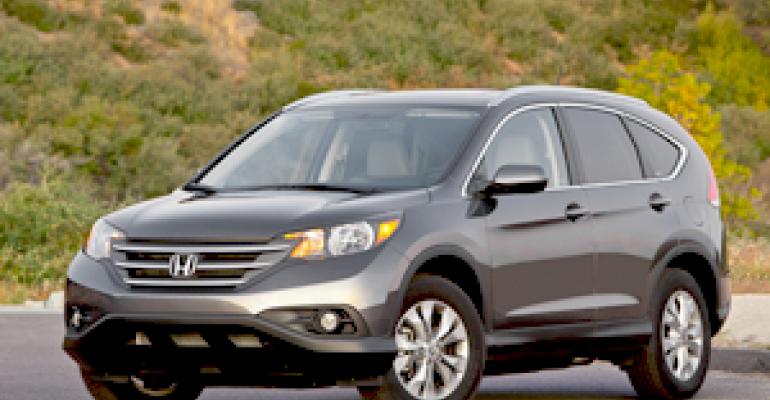 The Honda CUV&#8217;s current customers should appreciate the better fuel economy and greater roominess, despite a carryover engine and transmission and hard-plastic interior. CARLSBAD, CA – It’s easy to view the all-new fourth-generation Honda CR-V as another miss by the No.2 Japanese auto maker.

Like the ’12 Civic compact car, on which the cross/utility vehicle is based, it has carryover technology, fair driving dynamics and an interior filled with hard plastic.

But the “cool moms” Honda is targeting with the ’12 model likely will appreciate the added interior volume and easier maneuverability, plus new creature comforts and increased fuel economy.

Although some critics chided the auto maker upon the third-generation’s 2006 debut for keeping the CR-V small, when competitors were growing bigger, the formula worked for Honda.

The fourth-gen CR-V loses an inch in length and almost as much in height from its predecessor, but Honda has boosted interior volume.

The cargo floor now is an inch lower, simplifying the process of loading large objects such as baby strollers.

Owners will like being able to fold the CR-V’s 60/40 split rear seats two ways: via a new cargo-compartment handle or a release at the base of each seat. Seats now fold flat, thanks to bottom cushions that separate from back cushions and flip forward.

Not pleasing to sporty-minded auto journalists but probably a boon for many drivers, the CR-V’s steering isn’t as heavy as the outgoing model’s.

Ride quality is just right: not too soft, nor too firm.

Overall, the cabin is more isolated from pavement variations and engine and road noise than its predecessor or the ’11 Escape and RAV4.

The new CR-V’s hard-plastic-centric interior isn’t as objectionable as the new Civic’s but at the same time fails to move the needle forward, regressing from the better-done, albeit hard-plastic interior of the ’11 CR-V.

In a first for Honda, the CR-V gets Pandora Internet radio functionality. However, as seen in the Hyundai Veloster, full compatibility only is possible with an iPhone; Android-phone users can stream audio through Bluetooth but lack most center-stack controls.

Standard Bluetooth connectivity and an optional, first-in-segment rear-seat entertainment system that will keep peace in the backseat also should put the new CUV on many moms’ shopping lists.

A Honda-first expanded driver’s side mirror is standard on ’12 CR-Vs, adding seven degrees of viewing angle to reduce blind spots. In practice, it is difficult to look far left and avoid the larger, normal magnification area. The Escape’s additional sub-mirror is easier to focus on.

Did Honda advance the ball far enough with the ’12 CR-V? For current customers, the answer likely is yes.

But maintaining the status quo with technology and interior materials may not win new customers, who can choose from an increasingly fuel-efficient, well-stocked entry-CUV range.