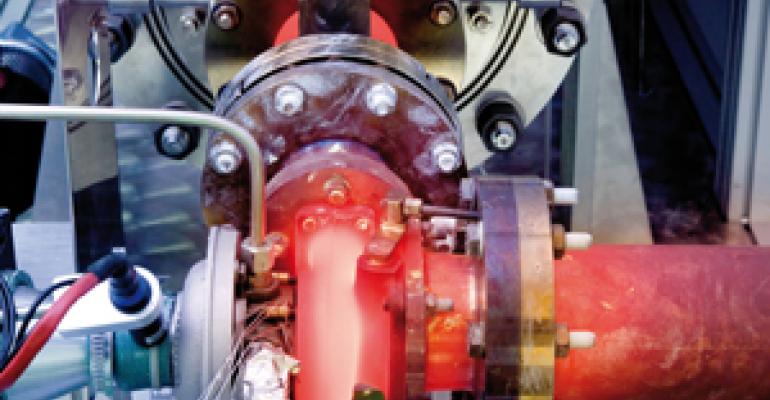 Continental says it has an advantage over competing turbo suppliers because it started with a clean slate, allowing it to be more innovative. FRANKFURT – Continental this month begins shipments of its first turbocharger as it seeks to tap into a market it projects will grow about 25% annually.

The supplier started work on developing a turbocharger for small gasoline engines in 2006, when it began to see nearly all auto makers trending toward downsized turbocharged mills.

Although it’s a relative newcomer to the turbocharger market, Continental is confident it can compete. In fact, starting with a blank sheet provides some distinct advantages, says Udo Schwerdel, head of Continental’s turbocharger product line.

“You have the freedom to start a new business and have a lot of new people joining (the program), so you think about what can be improved and you don’t have a lot of boundary conditions you have to fulfill,” he tells WardsAuto at the recent Frankfurt auto show here.

“So what we did was really think about what a turbocharger should look like for a small engine at a high-production volume,” Schwerdel adds, noting new hires to the turbocharger development team were told, “Here’s your future, come and bring your ideas in.”

To keep CO2 emissions to a minimum, Continental’s turbo uses electric waste-gate actuation, which requires one-third less force to open and close than a traditional setup.

Electric actuation generally is faster and allows more freedom to calibrate and close off the waste gate. By ensuring it’s open or closed as needed, fuel consumption can be reduced by increasing engine and turbo efficiency.

Continental added a new twist by reducing the size of the waste gate and actuator. The smaller size allowed the supplier to integrate both components into the compressor housing.

“Inertia is a huge difference when it comes to transient response, and this design reduces the volume of inertia of the wheel by 35%-40%,” Schwerdel says. “It has to do with the size of the wheel, so you have to try and minimize that.”

To mitigate costs, Continental and its manufacturing partner, the Schaeffler Group, developed a fully automated assembly process that takes place along a single axis, whereas conventional turbochargers are assembled in several stages, sometimes partly by hand.

“It’s a value proposition,” Schwerdel says. “You can’t find a turbo in the market right now like this. We can really build things step by step on the axis, and that helps quite a lot. It saves space inside the turbocharger, and we use that space to improve the sealing.”

The first turbochargers from Continental are for a European auto maker’s 1.0L gas engine. Continental does not disclose the name of the auto maker, citing customer confidentiality.

However, Schwerdel says going forward the supplier’s turbochargers will be offered for large gas engines, as well as diesel applications.