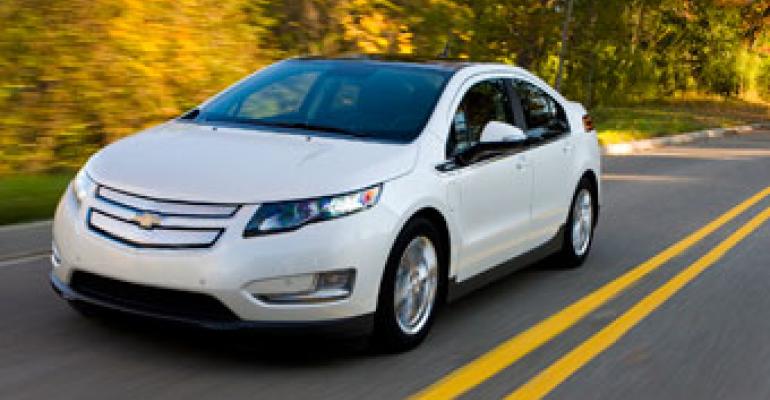 GM sold 1,139 Volts in November, a month where its overall deliveries rose 2.7% to 180,402 units, according to WardsAuto data. There was one extra selling day last month compared with like-2010.

November marked the best-ever month for the Volt since its historic launch almost one year ago, but the result also signals the car will fall short of the 10,000 units GM had targeted. The auto maker now forecasts it will eclipse that mark in early 2012.

Expect higher Volt sales in December, GM says, because a recent decision to allow dealers to sell their demonstration models has freed up 4,000 of the cars.

“People have not been able to see the vehicle and drive the vehicle,” Chevy sales chief Alan Batey says, reiterating GM’s claim the Volt has been hampered by limited availability. Most dealers have just one in stock and until recently those were the earmarked as demonstration models meant mostly to raise awareness.

“It’s no silver bullet,” he says of selling demo models, “but our launch activities are now under way, and we are going to have availability growing and we’ll start to be able to really satisfy the demand.”

GM will not put incentives on those demonstrations models, which cannot be classified as a new car. Instead it will reimburse dealers a discounted amount so store owners are not “out of pocket,” Batey says.

GM hopes to sell 45,000 Volts in 2012. But that target now comes into question after the National Highway Traffic Safety Admin. opened a formal safety defect investigation into the car last month because of post-crash-test fires in its lithium-ion battery pack.

GM responded to the NHTSA news earlier this week by offering current Volt owners a loaner vehicle if they are concerned about safety while the auto maker determines a protocol for handling severely damaged battery packs. Thirty-three of some 5,300 owners have taken the offer so far.

Batey does not indicate whether there has been any fallout in the marketplace in the few short days since NHTSA announced its investigation, saying only that current customers have responded positively to GM’s reassurances that no immediate risk to their safety exists.

The auto maker has made the Volt a central element of its image-rebuilding campaign following its 2009 bankruptcy. So far the plan has worked, drawing new shoppers to Chevrolet and spurring sales of other fuel-efficient models.

“This vehicle is about more than how many we sell in a month,” Batey says.

The auto maker witnessed an overall uptick in sales in November, boosted by brisk demand for its pickups and SUVs.

Don Johnson, GM’s chief sales analyst, says seasonality played a big role in the popularity of trucks in the month, but higher incentives to clear out ’11 models to make room for ’12 models now arriving also affected the numbers.

“I would call it a typical end-of-the-year phenomenon,” Johnson says.

GM’s incentive spend in the month grew to 10.5% of its average transaction prices, or slightly above the industry average. Year-to-date, the auto maker’s discounting, which it wants to minimize to preserve profitability, remains flat with the rest of the industry.

Sales of the Chevy Cruze compact car totaled 13,238, up substantially from a performance in like-2010 limited by availability. But volume was down for a fifth consecutive month as competitors such as Toyota and Honda rebuild inventories depleted by the earthquake and tsunami in Japan earlier this year.

“Based on the results, we’re still No.1” in the segment, Batey counters.

The Chevy Equinox and GMC Terrain cross/utility vehicles also suffered sales declines in November, off by 6.8% and 8%, respectively. For the Equinox, the month marked the first year-over-year drop since August 2010.

Johnson says the Chevy Captiva CUV stole Equinox sales in the month as planned. GM introduced the Captiva to fleet customers last month to preserve the richer retail sales for the Equinox. The Terrain suffered from a short supply, the auto maker says.

GM ended November with 620,000 vehicles in stock, including roughly 200,000 trucks. The auto maker says it remains on track to finish the year with an overall inventory in the high 500,000-unit range.