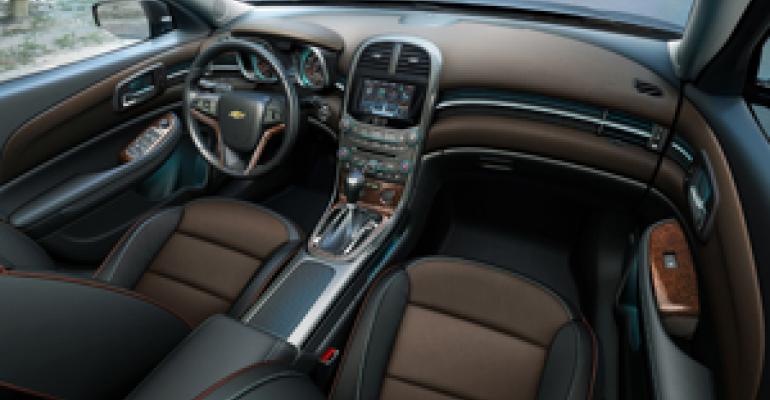 MILFORD, MI – “Don’t sweat the details” is a phrase that never passed the lips of the ’13 Chevrolet Malibu interior design and engineering team.

From overall construction to quietness to seat comfort, no detail was overlooked in the design process, which had the ultimate goal of besting both the previous-generation Malibu and its formidable midsize competitors, says Crystal Windham, director-interior design.

“The current Malibu is a tough act to follow, and we think interior plays a big role,” she says during a recent media event at the auto maker’s proving grounds here.

The Malibu carries forward the previous-generation’s dual-cockpit zone, which the auto maker says enhances the feeling of spaciousness.

Windham says the dual-cockpit concept was “embellished” in the ’13 model, by creating a sense of the driver and passenger further being separated by the flowing mid-instrument panel.

With plans to sell the midsize sedan in more than 100 countries, a number of materials were chosen to adorn the interior, including different-color cloths and leathers, as well as metallic, chrome and wood accents.

Gauges were also made larger, borrowing from the retro theme used in the Camaro pony car. Primary controls also gained in size; research indicated some knobs and buttons were rarely used, allowing designers to downsize them.

Plenty of storage cubbies also were added, including one hidden behind the 7-in. (18-cm) touchscreen, a first for the North American market, Windham says.

But perhaps it’s what lurks behind the interior treatment that is most impressive.

It was the task of Kara Gordon, lead acoustic engineer, to ensure the cabin was as quiet as possible.

“Someone told me once, the loudest sound you hear is the first rattle in a brand-new car,” she says. “We want to make sure you hear what we want you to hear; we want to convey something to you (about the car).”

Gordon’s team made extensive use of nine Aachen heads, an acoustic recording device that resembles a human head and shoulders and approximates human hearing.

The heads provided “depth and directionality” not possible with a single microphone, Gordon says.

They also allowed engineers to record sounds heard while driving and play them back later, which helps make up for the limited acoustic recall of humans, she says.

“Although our sense of hearing is really good, our acoustic memory is very poor,” she says. “We only have about 10 seconds of acoustic memory. Even if sounds are completely different, if you’re away for 15 seconds you can’t tell me which one is which, which is louder or what it sounded like.”

Once noise-producing areas of the car were determined, a variety of methods and materials were used either to block or absorb them.

Isolating the engine was particularly challenging, as it produces the most noise of any part of a car, she says.

To keep engine noise down, cradle mounts were designed to minimize vibration, and sound-dampening material was placed between the cockpit and engine compartment.

Minimizing tire noise was difficult because the Malibu is sold in so many regions, Gordon says.

“With so many countries, we have regional challenges, including surfaces,” she says, noting 12 sets of tires are offered on the Malibu on its differing global iterations.

China’s cross-groove concrete, used to keep water from puddling on the road, was a surface that had to be replicated at a GM test track in order to devise a way to quiet the sound it transmitted into the vehicle.

Tire suppliers joined engineers at the test track, and tested a number of tires that could be added to the Malibu sold in China. The tires that produced the least amount of noise were chosen by test groups in a GM laboratory.

Seating comfort also was made a priority. GM engineers developed all criteria for the seats, which were then passed on to global supplier partners.

Remarkably, some elements of the seats, including their overall shape and contour, were designed using a human-sized metallic dummy named Oscar that was developed in the 1960s.

“(Oscar) is good for seat comfort, because he’s a standardized human form,” says Daniel Cohen, seat-comfort engineer. “The designs of the interiors begin with Oscar.”

Virtual modeling is used in addition to Oscar. Data derived from Oscar and from high-tech virtual mapping complement each other.

Cohen says the Malibu’s seats, which largely are the same in all regions, were designed to accommodate everyone from large males to small females.

The first layer of the seats is soft foam that “crushes” away and gives the feeling of softness. Underneath that is a firmer layer of foam for support. An even firmer material is used for side bolsters.

The backbone of the seats is a suspension that dampens bumps and provides durability, he says. “Customers want seats to be usable, not only to hold people, but child seats and other things. We want to make sure our seats can stand up to that.”

To make sure pressure is distributed equally along a person’s body, Cohen and his team place a thin mat over the seat that captures 4,600 pressure points.

“Typically we run a clinic with people of different shapes and sizes,” he says. “Sometimes it takes an hour or so for people to pick up on a problem, but this allows us to see it right away.”

In the infotainment arena, the ’13 Malibu will get MyLink, a system similar to that found in the Chevrolet Volt extended-range hybrid-electric vehicle.

The system allows for hands-free voice control of most features, USB connections with flash memory, and the capability to stream music via a Bluetooth connection.

“We wanted the touchscreen to make it obvious what everything does,” she says, noting there are also redundant switches for those who prefer a traditional method of operation.

When asked if redundant switches were added to avoid the controversy surrounding the MyFord Touch system, which has been slammed for being overly complicated, McMahon says GM’s system was designed before the flap over Ford’s system began.

McMahon brushes aside criticism GM is late to the infotainment market, with many competitors already offering systems that interact with consumers’ smartphones and other devices.

GM, she argues, was actually an early player in the connectivity field.

“We had OnStar 15 years ago, so we were there with connectivity, and we understood people wanted it,” she says. “But we focused on the car experience, including safety and security. Now that smartphones are so huge, we had to provide that (connectivity) and make it safe and intuitive.”

MyLink will debut on the ’13 Malibu early next year, and will be introduced on most Chevrolet models during the next 18 to 24 months, the auto maker says.

The system will be offered in particular trend levels, rather than as a stand-alone option.

GMC and Buick will get their own version of the system, dubbed Intellilink. Cadillac also will get a system, but GM has yet to announce what it will be named.

All the systems will share similarities, but also will evolve and add features that reflect the image of each individual brand, McMahon says, declining to provide details.