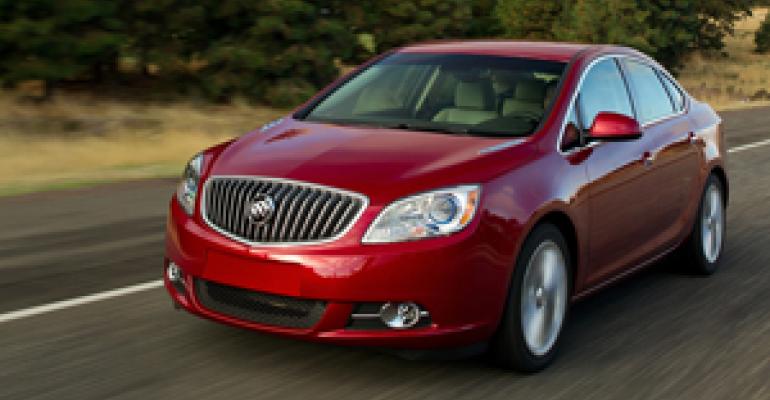 General Motors engineers blanketed the new-for-&#8217;12 Verano in a dozen different noise-damping technologies meant to make its cabin library-quiet at any speed. NEW YORK – Creeping through midtown Manhattan during rush hour in the quiet confines of a Buick Verano, it is easy to forget the more than 1.5 million other vehicles also plying the streets.

Then we crack the window. Ah, yes, now that’s the New York City soundtrack we know – a cacophony of taxi horns over droning diesel engines and the occasional obscenity.

On this rainy Wednesday, which for the record is the busiest traffic day of the week for the borough, we’re trying to get out of town and test how the Verano’s 2.4L 4-cyl. engine and racing-derived suspension might position it in the nascent compact-luxury segment.

Instead, we’re stuck at a red light on 9th Avenue, sandwiched between a throng of over-caffeinated cabbies and a Class 5 postal-delivery truck, marveling at how the sedan blocks out everything but the view.

To make its cabin library-quiet at any speed, General Motors engineers blanketed the new-for-’12 Verano in a dozen different noise-damping technologies, including the triple-sealed doors and extra-thick laminated windshield and side-window glass masking the city’s discord in our traffic back-up.

Slipping onto the Henry Hudson Parkway and getting the 5-passenger Verano up near highway speeds, items such as thicker carpet, isolated chassis components and acoustic insulation in the doors, hood and dash panel muffle the sound of the wet roadway.

The Verano also owes some of its quietness to the liberal use of high-strength steel for its body structure, as well as hydraulic suspension bushings and an isolated engine cradle.

In short, the car is put together tight as a snare drum but refuses to transmit into the cabin thuds from a pock-marked Hudson Parkway or those loud ticks inherent in high-pressure injectors of its direct-injection engine.

But while the Verano might make for a good urban retreat, it is no sleep chamber.

The 180-hp Ecotec I-4, which GM uses in a number of other vehicles, may have found a perfect home inside the Verano. Mated to a second-generation 6-speed automatic transmission just now making its way through the GM portfolio, the combination offers a great mix of fun and civility.

With the transmission in sport mode and using an awfully quick tap-up/tap-down shifting feature, we dart in and out of traffic and weave our way up the Saw Mill River Parkway like a bond trader blowing off steam after a long day on Wall Street.

The exterior of the Verano carries some increasingly common Buick design cues, such as the portholes near the base of the A-pillar, blue-ringed headlamps, a black “waterfall” grille and glints of brightwork everywhere.

The chrome slabs atop the rear lamps make for an angry brow. But as polarizing as they might turn out, they add sporty character.

Unfortunately, to achieve the steeply raked windshield that heightens the effect of the Verano’s arched roofline, the auto maker added a daylight opening near the base of the A-pillar to meet visibility requirements. It cheapens an otherwise appealing exterior.

A blocked-out grille, which with its texture appears to have grates from a distance, also may raise eyebrows. Up close it looks like the plastic that it is, but by creating better aerodynamics it also is a big reason the car can turn in up to 31 mpg (7.6 L/100 km).

Inside, the Verano mixes supple leather seating surfaces with wood-, titanium and chrome-like accents and ice-blue lighting. It’s luxury on a budget and pulled off successfully.

GM designers did particularly good work on the doors, where sweeping lines converge and expand to incorporate the armrest, door handles, door pulls and speakers for the Bose audio system.

A handful of nooks and crannies make for good storage, but they fill up quickly.

Nor are we fond of the side-window defogger vents, another consequence of the raked windshield. They are oversized and unattractive. Hopefully, GM integrates them better on future models.

Big gaps exist where the front driver and passenger doors meet the dash.

An oversized trunk defies compact-car tradition and does not come at the cost of rear legroom, which any average-sized person would find adequate.

The Verano also includes IntelliLink technology, the Buick infotainment system featuring a 7-in. (17.8 cm) touchscreen and allowing either Bluetooth or USB connectivity for smartphones and access to services such as Pandora Internet radio and Stitcher talk radio.

Prospective buyers might find the Verano’s most attractive attribute is its price, starting at $23,470 including destination charges. Top-trim-level Veranos begin at $26,850. Units from GM’s Orion Twp., MI, assembly plant will begin populating dealer lots in numbers by the end of the year.

Next year, look for a performance model using the same 2.0L 4-cyl. turbocharged engine found in the Regal Turbo and Regal GS. But a Verano model using the eAssist hybrid system is unlikely, GM engineers say.

In a segment with few competitors, such as the Audi A3 and Lexus IS 250, the Verano arrives as a solidly built, good-looking and well-performing choice over the import soup sure to flood the gates soon.