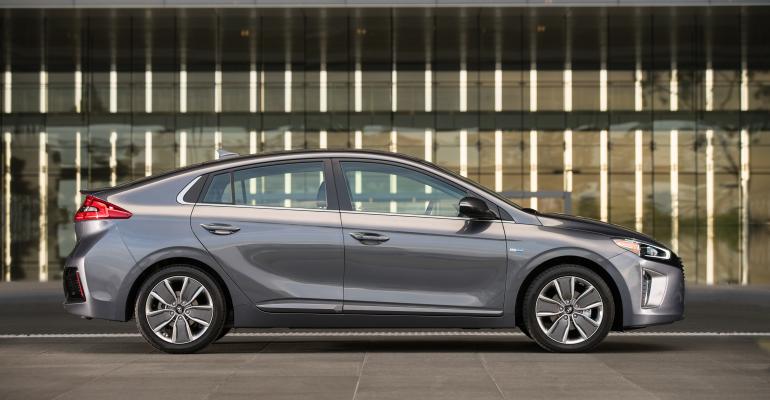 <p><strong>Hyundai Ioniq hybrid on sale late this year in U.S.</strong></p>

Hyundai: We May Need to Incentivize Ioniq

&ldquo;Nothing anymore sells itself, but the (low) fuel prices definitely create a situation where demand is lower than we&rsquo;d like to see it,&rdquo; Hyundai&rsquo;s U.S. CEO says.

NEW YORK – With fuel prices still at near-record lows in the U.S., automakers bringing out alternative-powertrain vehicles are facing the challenge of how to spur interest in them.

Hyundai is among them. The automaker yesterday revealed its new trio of green cars, the Ioniq lineup, at the 2016 New York International Auto Show.

Dave Zuchowski, CEO-Hyundai Motor America, says the automaker may have to resort to incentivizing the cars from the start if low gasoline prices persist.

“Nothing anymore sells itself, but the (low) fuel prices definitely create a situation where demand is lower than we’d like to see it,” Zuchowski tells WardsAuto on the sidelines of the Ioniq press conference here. “With gas at $2 a gallon there isn’t much natural demand for an alternative-fuel vehicle that’s going to generate terrific mileage.”

The Ioniq hybrid goes into production for the U.S. in November, with the all-electric variant following 45 days later. The Ioniq plug-in hybrid arrives next summer.

Hyundai wants to make green cars desirable because they are good for the environment – the Ioniq press conference was helmed by noted environmentalist David De Rothschild, who has been at several global Ioniq unveilings – but Zuchowski notes that’s tough to do.

“Most people still buy their vehicles based on the ability to save gas,” he says.

Therefore Hyundai will watch fuel prices closely and manage production accordingly, and may initially may incentivize via subvented leases. “That’s certainly a possibility,” Zuchowski says of the latter.

Subvented leasing has been a favorite tool of brands trying to move green cars, thanks to state and federal tax credits for EVs and PHEVs that are taken by the lender, not the buyer and reduce the price of a new alternative-powertrain vehicle sharply.

Chevy also reportedly has been offering cash back on the new Volt in select markets.

That Chevy or any other brand selling EVs or PHEVs already is resorting to spiffs isn’t surprising, as Zuchowski reminds that 2025 is just around the corner.

In California, 2025 also is the year 15.4% of all vehicles sold in the state must be zero-emissions vehicles such as EVs or hydrogen fuel-cell vehicles.

“We’ve all got to be there and we’re heavily dependent upon these vehicles for both the ZEV requirements and the CAFE requirements, so we need to get the volume out of (these vehicles) to bring our CAFE down,” Zuchowksi says.

Through February, sales of hybrids were down 13.4% and EVs fell 23.0%, WardsAuto data shows. However, due to increased Volt volume, plus new PHEVs from Hyundai (Sonata PHEV) and Mercedes and Audi, plug-in deliveries rose 41.8% to 6,664.