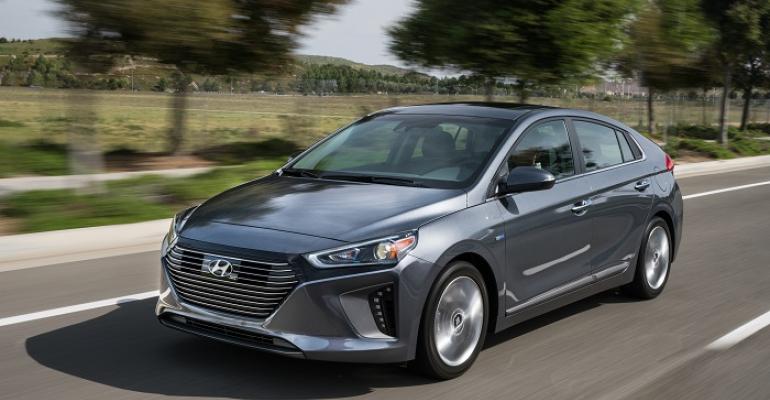 The 3-vehicle Ioniq lineup, seen by industry-watchers as the strongest competition yet for Toyota’s Prius, includes a hybrid, plug-in hybrid and all-electric models.

The hybrid and EV are expected to arrive in the States this fall, slightly ahead of the PHEV.

All three models have the same powertrains detailed in overseas press materials, although output ratings vary slightly due to U.S. testing methodologies and standards.

The U.S. version of the Ioniq Hybrid uses a 1.6L direct-injected Atkinson-cycle 4-cyl. and a 32-kW (43-hp) electric motor and is projected to churn out 139 hp total.

The motor is powered by a 1.56 kWh lithium-ion battery pack, placed under the rear seats.

The Ioniq Plug-In uses the same 1.6L engine as the hybrid, but has a more powerful electric motor, a 45-kW (60-hp) unit, and a denser 8.9 kWh Li-ion pack. Hyundai estimates all-electric range for the Ioniq PHEV of more than 25 miles (40 km).

For the car’s permanent-magnet synchronous motors, Hyundai says it reduced the thickness of core components up to 10% and is using rectangular-section copper wire to limit copper and core loss.

The Ioniq Electric also has low-beam LED headlamps and a unique “sleek” grille because it requires no engine cooling.

Clutter-free and ecologically focused is how Hyundai describes the car’s interior. Sugarcane-derived materials are used in the Ioniq’s headliner and plastic mixed with powdered wood and volcanic stone make up the interior door covers.

Hyundai keeps the Ioniq’s weight down by using aluminum in the car’s hood and tailgate and in front and rear suspension parts. Hyundai also says it omitted a 12V lead-acid auxiliary battery as a lightweighting measure.

The Korean automaker considers the Ioniq to be as much about technology as efficiency, noting it offers a 7-in. (17.8-cm) high-definition TFT cluster with unique backgrounds and gauges for Sport and Eco transmission modes, Apple CarPlay and Android Auto, a wireless inductive phone-charging pad and a slew of advanced safety technologies, including lane-departure warning, blindspot detection, automatic emergency braking with pedestrian detection and adaptive cruise control.

While the Prius may be seen as its main competitor the Ioniq isn’t seen achieving similar volumes, at least initially.

A Hyundai spokesman told WardsAuto last month the automaker expected 77,000 global sales of the hybrid variant this year. Toyota sold more than 100,000 Priuses alone in the U.S. last year, not including wagon, compact and plug-in variants.