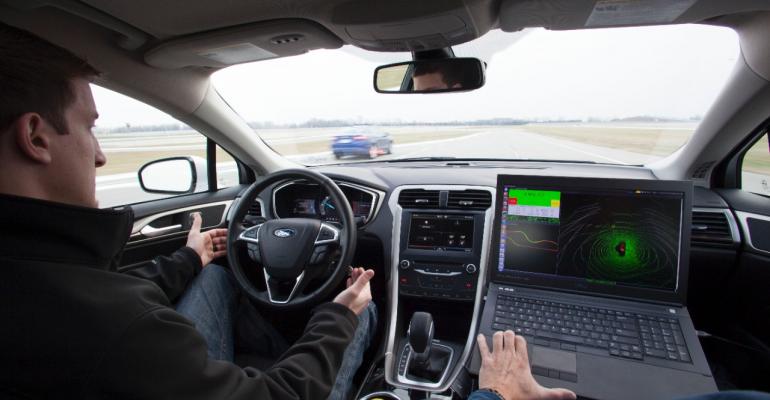 They will drive themselves, but autonomous vehicles will need repair work, says NADA president.&nbsp;

NEW YORK – Tomorrow’s autonomous cars will drive themselves, but that won’t exempt them from needing to beeline to repair shops when things go wrong.

When such regrettable things happen, car dealerships will be ready with tools – and high-tech fix-it equipment – at hand, he says.

“Those vehicles will be incredibly sophisticated with something like 500,000 million lines of operating script,” Welch tells a gathering at the 2016 Automotive Forum hosted by NADA and J.D. Power. The conference is held in conjunction with the New York International Auto Show.

Will a vehicle that drives itself fundamentally get serviced differently? “No,” Welch says. “Dealers will be agnostic in servicing a car whether it is autonomous or not.”

He expresses concerns about how much the self-drivers will cost and whether high prices will push some consumers out of the market.

Privately owned vehicles provide the freedom of mobility to millions of people, he says. “Any business model that denies that freedom will face resistance.”

Economics is the great determiner of car ownership, Welch says. “Who wouldn’t aspire to own a car, if it’s not an economic issue?”

The retail cost of self-driving cars might cause some consumers to go into sticker shock, but prices should go down as the advanced technology becomes more mainstream, says conference presenter Stephen Odell, Ford’s senior vice president-global marketing sales and service.

Adds Deliotte auto analyst Jon Vitale: “If you can get to a solid-state vehicle and take the mass out, you can dramatically reduce costs.”

Working on its version of self-driving cars, Google hasn’t thought much about the ultimate selling of a finished product, says John Krafcik, who heads the company’s ambitious project.

“We don’t know,” he says when asked how self-driving cars will come to market. “Google hasn’t figured that out yet.”

“Dealerships will be super-busy servicing them. There will be a lot of back-end opportunities.”

Google’s self-driving vehicles have garnered much attention, but virtually every major automaker is working on a version of their own. Ford has the largest fleet of self-driving prototypes in the world – as well as a history of bringing innovative products to the masses, Odell says.

“We were the first to do tests in snow,” he says. “Autonomous vehicles don’t just operate on sunny days.”

Asked if he would want to own an autonomous vehicle, Vitale says he has driven one in the development stages, but he doesn’t plan to becoming an early adopter.

Asked the same question, Welch says: “The answer is simple. Yes, as long as everyone else owns one.”