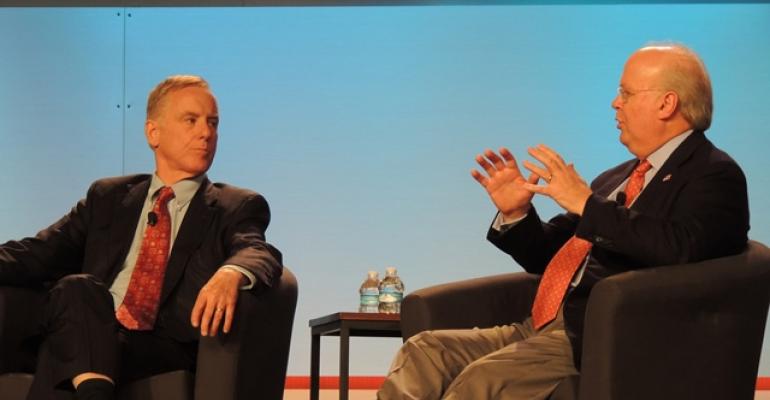 When it comes to who should be the next president of the United States, it seems everyone at NADA is on the same page: Someone who will know how to work with the other party.

LAS VEGAS – Democrat Howard Dean and Republican Karl Rove sit on opposite sides of the ideological aisle. But one thing they see eye to eye on: Washington needs to get back to work.

And automobile dealers here agree with them both, applauding loudest when the two express frustration with the country’s political gridlock during a panel discussion here led by Politico correspondent Mike Allen.

Of course, Dean, a former governor of New York and an MSNBC regular, and Rove, a former deputy chief of staff for President George W. Bush and a Fox News pundit, aren’t able to find common ground on who’s to blame for the dysfunctional government. Rove points the finger at President Obama; Dean says inflexible Tea Party Republicans are the culprits.

But they are back on the same page when it comes to who should be the next president of the United States: Someone who will be able to work with the opposition party.

“We’ve got to put politics aside at some point and actually get something done,” Dean says.

“I agree, the tone is going to be important,” Rove says. “I think the country is desperate for (the two sides to work together).”

Even members of Congress are “sick and tired of the endless warfare,” he adds. “Whoever this next president is, whether Democrat or Republican, vegetarian, prohibitionist, my God, I hope they set a different tone.”

Dean and Rove agree on something else as well: Donald Trump won’t be the next POTUS. Both say the Wisconsin primary, set for Tuesday, could be the beginning of the end for the candidate’s campaign if he fails to win by a significant margin.

“I’ve been wrong about Trump every time since June, so I don’t want to make any big pronouncements, but this may be his Waterloo this week,” Dean says of the upcoming primary.

“Not going to happen,” Rove says of a Trump presidency.

Dean is pulling for Democratic hopeful Hilary Clinton, who he says is smart, fact-based and a great statesperson. “She’s somebody who I think will work with the other side.”

Rove believes the Republican convention will be a brokered one, possibly with a candidate emerging from outside the original 17 contenders.

“If have to pick (a winner), I think it would be not Donald Trump, not (closest contender) Ted Cruz,” Rove says. “I think it’s likely to be someone else.”

Other takeaways from the two pundits: