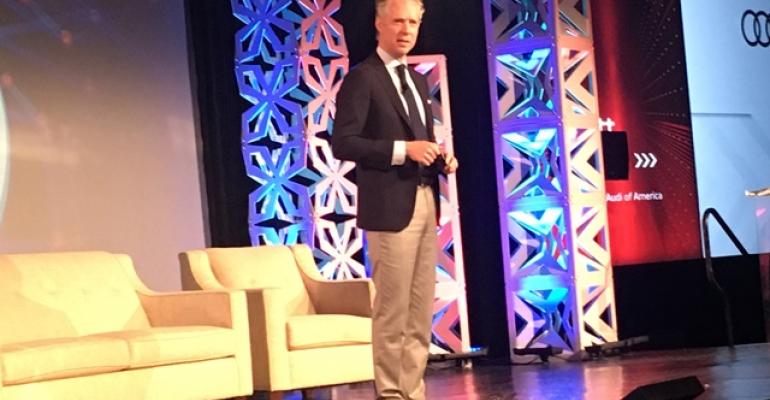 The U.S. importer plans to introduce three new battery-electric vehicles in the U.S. by 2020 and President Scott Keogh knows the brand will need its dealer body behind the effort if it is to be successful.

NEW ORLEANS – Audi of America is set to make a bigger push into electrification and wants its dealer body to get onboard with the movement.

Speaking to the J.D. Power Automotive Summit Thursday, on the eve of the opening of this year’s NADA Convention and Exhibition here, Audi of America President Scott Keogh says U.S. dealers need to embrace the unfolding market trends of electrification and mobility or face an uncertain future.

Audi plans to introduce three new battery-electric vehicles in the U.S. by 2020, part of parent Volkswagen Group’s initiative to put 30 electrified vehicles on the market by 2025, and Keogh knows the brand will need its dealer body behind the effort if it is to be successful.

“Do we want to jump in and compete? Without a doubt,” Keogh says of the new technology wave around EVs, connectivity and mobility. “We have the resources, the scale, the infrastructure, the customers (and) the dealers to compete in this new order.”

Keogh says the movement to BEVs will be unstoppable in the U.S., suggesting that driving range between charges, now topping 200 miles (322 km) in cars such as the Chevrolet Bolt, soon will reach 400 miles (644 km) and eventually 500 miles (805 km).

Coupled with a growing charging infrastructure, that quickly will make range anxiety a thing of the past, Keogh says. VW has pledged to spend $2 billion on installing public charging stations across the country over the next 10 years as part of its Dieselgate emissions-cheating settlement.

“All this fright about where am I going to get a charge is going to go away extremely fast,” Keogh says. “The technology on this front is moving at a staggering pace. You’re going to be looking at a marketplace in the next seven, eight, nine, 10 years where for 30 or 40 some brands their entire business is going to be battery-electric vehicles.”

The electrification movement may impact dealer service operations, because BEVs have about one-fifth fewer parts that will need to be repaired or replaced, Keogh points out. That’s why he encourages dealers here to start looking for new opportunities around BEVs that will allow them to more than offset the potential loss of business in their back shops.

“We have to look at alternative channels and start to make money,” he tells dealers, suggesting they ultimately get into the business of offering customers home-charging installation and other services around BEVs. “These cars are going to have to be fixed less. But you’re going to have a host of opportunities around the battery and helping the customer in their home.

In the meantime, Audi will seek to balance supply with demand in an effort to continue building its brand and potentially improving dealer profitability, Keogh says, limiting inventory to 60 days and cutting production if needed, rather than hiking incentives, if stocks begin to swell. Industry incentives average $4,100 per unit in the luxury sector, he says, while Audi is averaging $2,900.

Keogh says dealers, who collectively will have invested $2 billion in new and upgraded facilities by 2020, need to adjust to a somewhat shrinking market.

“The luxury market is down 1.4%-1.5% roughly,” he says. “We are now beyond those record highs. Now the reality is how will dealers and how will companies behave.”

Retailers, he says, must “shift the mentality of the business to command a premium.” Some dealers are making so much money on service and parts, they “just let cars fly out the door” at cut-rate prices.

“That’s a very, very profoundly dangerous game,” the Audi executive says. “Because you end up telling the customer…(the vehicle) has diminished value. We have to come to the point where we are selling a product that has value.

“Because you have to have a strong brand, or frankly, you don’t have anything.”

As for potential impact from the Trump Admin., which is threatening a 20% tax on imports from Mexico, where Audi is launching production of its critical all-new Q5 CUV, Keogh says Audi is taking a wait and see approach, though he admits to some game planning under way just in case import restraints become a reality.

“It’s certainly interesting times, and they change by the minute,” he says. “We will deal with whatever comes our way fairly. But you have to look at the strategic impact of (our) factories. These are put in locations based on trade structures that were set up by governments. We operate as a company based on global trade infrastructures.

“But let’s see where it goes,” he adds. “I’m in the automotive business. We run more scenario plans than you could imagine. We have plenty around this. We will brace for politically what comes our way and do it fairly and competitively.”