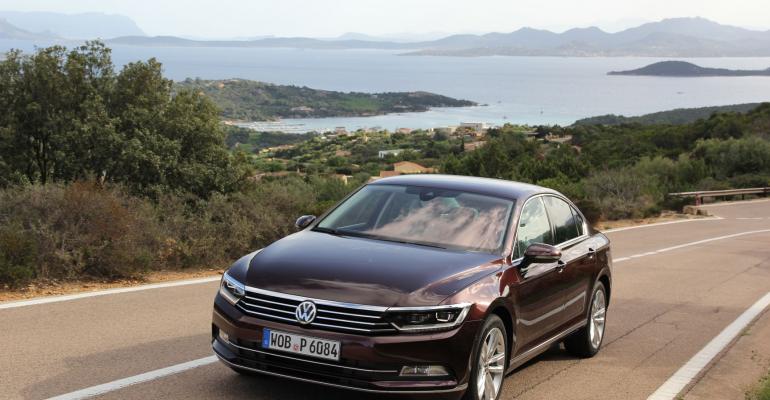 Although its overall dimensions are virtually unchanged, the revamped Passat rewrites the rules in its segment by sitting on a longer wheelbase, allowing for a much roomier cabin.

TURIN – The new Volkswagen Passat for Europe, now in its eighth generation since launching in 1973, has its sights set on a new sales record.

About 22 million Passat sedans and wagons have been sold to date, and last year the midsize car set its all-time record at 1.1 million units. Now, the new generation is unofficially targeted at 1.3 million units per year.

The new model, available from launch in both sedan and wagon configurations, is almost a full-fledged flagship for the VW brand, especially in top-level trim and loaded with optional equipment.

The car is dressed to look smart and elegant, with a strong personality, but is not too luxurious or arrogant, as some of its German rivals, including those from sister brand Audi, tend to be.

Buyers should be drawn in by the styling and value-for-money, challenging, in this respect, the best from rival Toyota.

The new pair, referred to as the Passat Limousine (sedan) and Variant (wagon), has more than it takes to win customers, including those fleet managers who care primarily about the operating cost-benefit ratio, but also are aware their company’s image goes through the cars its managers drive.

Although its overall dimensions are virtually unchanged, the revamped Passat rewrites the rules in its segment by sitting on a much longer wheelbase, up as much as 3.1 ins. (80 mm) from 106.7 ins. to 109.8 ins. (2,710 mm to 2,790 mm). Half of that gain goes to increase the cabin length and interior roominess.

The dimensional revolution results from the movement of the Passat onto VW’s MQB modular platform, which also underpins the Golf. It gives the car completely new proportions, with short front and rear overhangs and a much longer and more dynamic hood.

The Passat offers its typical range of gasoline and diesel powertrains, with displacements of 1.4L, 1.6L and 2.0L, but all are some 88 lbs. (40 kg) lighter and feature new piezo fuel injectors, revised electronic controls, higher turbocharging pressures and increased torque. Fuel efficiency is boosted 20% on average. Output runs from 118 hp for the base engine to 237 hp for the 2.0L Biturbo TDI diesel.

With the longer wheelbase, 187-lb. (85-kg) reduction in overall mass and better weight distribution, the new Passat is more comfortable, refined and better performing, no matter what the powertrain.

Most impressive isn’t the top-end 2.0L gasoline engine, but the minimalist 1.4L BlueMotion car that not only is extremely fuel-efficient, but also is fitted with beautiful white leather upholstery and a long list of options, and still can reach a top speed of 137 mph (220 km/h).

Inside, the Passat features a clean, bright design and a wide range of standard equipment, as well as options such as a large center navigation screen and head-up display. The analogue gauges are neatly styled, and a clock in the middle of the dash adds a touch of elegance.

On the way is the Passat GTE, a plug-in hybrid-electric model unveiled but not due for sale until well into 2015. It will boast fuel economy better than 118 mpg-e (2.0 L/100 km), VW says, and include a full complement of advanced safety features, such as automatic post-collision braking and front assist and city emergency braking with pedestrian monitoring.