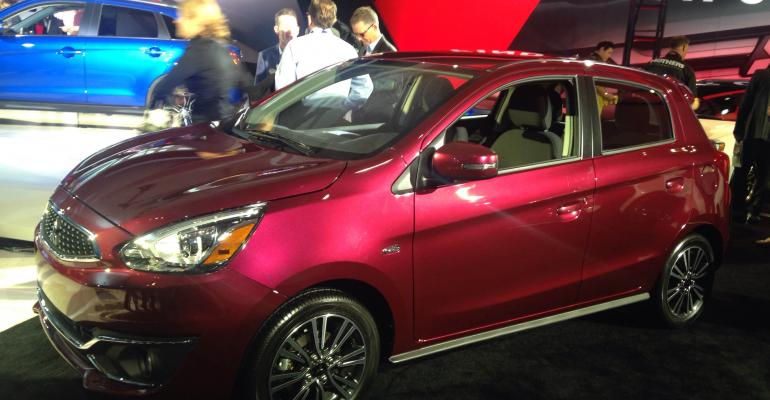 LOS ANGELES – Mitsubishi brings to the auto show here two world debuts – of the ’16 Outlander Sport and ’17 Mirage – and an updated version of an economical favorite in the ’ 16 Lancer.

The Outlander Sport and Mirage feature a variety of new designs, including a significant reworking of their front fascias that bring a unified look to the automaker’s entire lineup.

The diminutive Mirage’s handling is improved by optimizing the shock absorbers’ spring rate and damping force while stiffness is added to the front end to achieve greater stability.

The front and rear brake-drum discs are bigger in diameter, while interior enhancements include new seat fabrics and an improved gauge cluster and steering wheel.

Improvements to the ’16 Outlander Sport include a redesigned steering wheel, a new 6.1-in. (15.5-cm) display audio, high-quality seat fabrics, new power folding side mirrors with LED turn indicators and a new 18-in. alloy wheel design.

Don Swearingen, executive vice president-Mitsubishi Motors North America, reminds reporters who were introduced to the ’16 Outlander earlier this year that they described the vehicle with “words like refined, quiet and smooth, stylish – but Outlander was just the beginning. It’s the Outlander Sport’s turn now.

“Here in the U.S., we’re offering a wider range of models with our fuel-efficient 2.4L engine. This expanded availability makes the Outlander Sport an even more desirable offering in a rapidly expanding segment, updated with the styling and features that customers want.”

The ’16 Lancer also receives a facelift and includes standard features expected to strengthen its position as a value leader in the compact sedan segment.

The U.S. recently became the top-selling market for the Mitsubishi brand globally.

But despite the high-profile advances to all three models inside and out, the inclusion of Android Auto and Apple CarPlay operating systems in the 1.2L 3-cyl. Mirage is stealing headlines coming out of the Los Angeles Convention Center.

The first in Mitsubishi’s U.S. product line to feature the popular infotainment apps, the Mirage also offers the option for a 300-watt Rockford Fosgate audio system.

Swearingen says that, while the new Mirage offers the “exceptional fuel economy and value buyers have come to expect,” the car also will provide a level of functionality “that today’s young buyers are absolutely going to love.

“Our new, in-car display audio works with Apple CarPlay and Android Auto, unexpected features that are hard to find on an entry-level vehicle,” he says. “Mirage drivers can now access maps, music and messages in a smarter and safer way.”

The Mirage quickly has become a prime example of how Mitsubishi’s models are “being modified to reflect American desires and tastes in terms of both styling and performance,” Swearingen says, adding the automaker’s recent success is a tale of gaining and keeping customer interest or, as he puts it, forward momentum.

Of course, he says, there’s “a lot more to our momentum story than just good looks. Our sales growth is consistently near the top of the pack. Year-to-date, our sales are up 25% higher than our previous 12 months.”

While improvements such as the new designs and array of high-tech features have added value to the Mitsubishi brand, “We haven’t deferred our eyes from fundamental practices like value and reliability found in all Mitsubishi vehicles. It all adds up to momentum.”