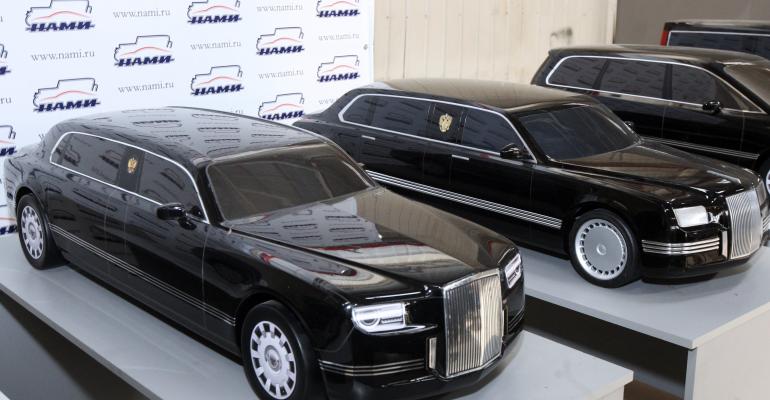 NAMI director Maxim Nagaitsev says the limousine to be built for President Vladimir Putin will be the world&rsquo;s largest passenger vehicle.

ST. PETERSBURG – The Russian government plans to launch production of new limousines and premium cars in 2017 as part of the Cortege project at NAMI, the country’s central automobile and engine R&D institute in Moscow.

Sources close to the administration of President Vladimir Putin say that total includes a limited number of limousines to be manufactured under special orders, mostly from the state.

NAMI director Maxim Nagaitsev says the limousine to be built for Putin will be the world’s largest passenger vehicle.

The project may involve the participation of global automakers such as Porsche, which may provide engines for the new vehicles. Global manufacturers also may contribute design expertise.

NAMI staff have completed the design of a single platform for the Cortege limousines and cars. The vehicles will have four different types of gasoline engines, the most powerful of which is a 7.0L V-12 generating 800-850 hp.

The Cortege project launched in 2012 and, in addition to luxury cars for top Russian officials, includes series production of a premium large passenger van, a sedan and a SUV. The government may consider building more than the planned 30,000 units due to devaluation of the ruble.

Russian Ministry of Industry and Trade analysts say the country has lacked premium-vehicle production capability since the closing of ZIL, a major automobile, truck, military-vehicle and heavy-equipment manufacturer based in Moscow.

Cortege production will use imported parts assembled from semi-knocked-down kits at NAMI and possibly Sollers, one of Russia’s leading vehicle assemblers.

The project also involves the updating and the expansion of the model range of UAZ, a Russian manufacturer of off-road vehicles, trucks and buses established in 1941. The company plans to create an all-new model using unibody architecture for the first time in the brand’s history and designed to compete with European and Asian budget CUVs.

Luxury-Car Sales Numbers Small But on Rise in Russia
Jul 27, 2015