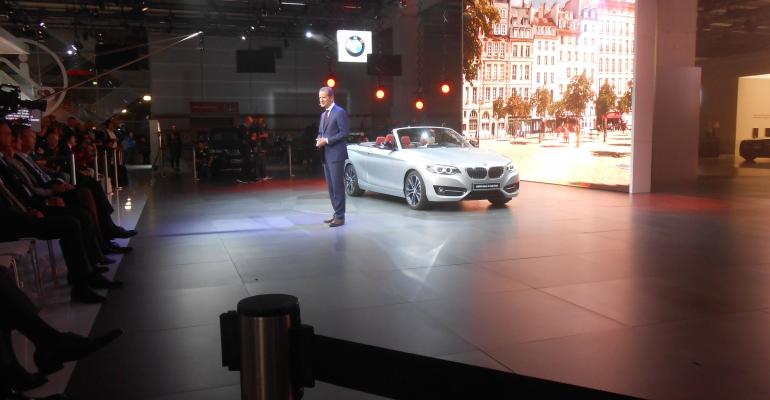 The new X6 replaces the first version, which went on sale in 2008 and found 250,000 customers. Today, the BMW X models make up a fourth of all brand volume.

PARIS – BMW launches two important replacements at the Paris auto show: the X6 CUV and the 2-Series convertible that succeeds the 1-Series version.

The convertible will go on sale in the U.S. in late April, two months after its Feb. 28 rollout in Europe.

The car is longer and wider, but mass remains about the same as the 1-Series, says Herbert Diess, head of product development for BMW. Depending on the engine, he says, fuel efficiency is up to 18% better.

Powerplants will include a 326-hp straight-6 in the M-Series 235i, which emits 199 g/km of carbon dioxide. That engine can be coupled with an 8-speed automatic transmission.

The X6 replaces the first version, which went on sale in 2008 and found 250,000 customers. Today, the BMW X models make up a fourth of all brand volume, says sales chief Ian Robertson.

The new X6 is more aerodynamic, and with a series of new engines is up to 22% more fuel-efficient, with CO2 emissions ranging from 157 g/km to 225 g/km.

As the new vehicles replace former models that have been at the end of their life, they may help BMW in 2015 in its tight sales race with Mercedes-Benz.

BMW also uses its Thursday morning press conference here to introduce a new 5-door Mini hatchback, two new BMW motorcycles and an electric motor scooter, and a version of the Rolls-Royce Phantom, the Metropolitan, with 6,800 handmade stitches in the seat covers.