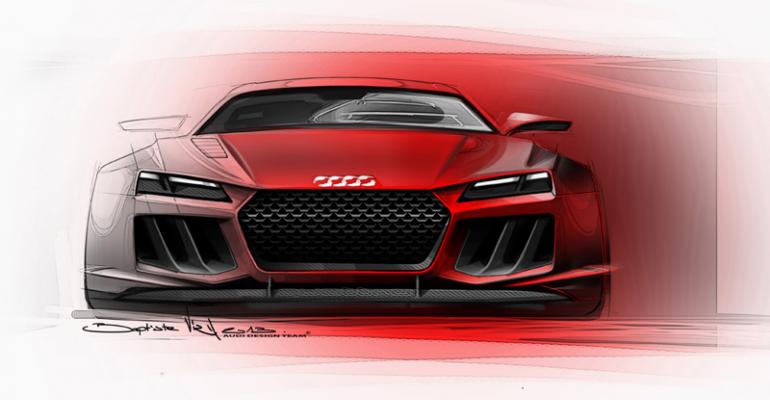 Audi Gets Bold With Quattro Sport Concept at Frankfurt

The bodywork is ultra-light-weight carbon-fiber plus aluminum, and its design, exterior and interior, is both emotional and fully committed to communicate the concept&rsquo;s technology and potential in a stronger-than-usual Audi style.

Audi says nothing about the car except its name, the Quattro Sport concept. But some media question whether the showcar is the brand's answer to the BMW i8 plug-in hybrid sports car.

Audi uses a familiar name to link the concept to its inspiring origin: the Audi 80 compact sports sedan developed for a sophisticated market and, subsequently, engineered to win the Rally World from 1982 through 1984.

Three decades later, Audi engineers and designers have better “raw material” to develop what is meant to be the most-advanced, powerful and spectacular Audi for the road ever.

The powerplant has not been announced but certainly will include race-tested E-tron electric-vehicle and hybrid technology.

The bodywork is ultra-light-weight carbon-fiber plus aluminum, and its design, exterior and interior, is both emotional and fully committed to communicate the concept’s technology and potential in a stronger-than-usual Audi style. In comparison, the beautiful concept presented at the Paris 2010 show with the same name now seems simple and conservative.

Audi has progressed dramatically since, and its silent revolution put the brand in the upper sphere of the world’s luxury brands. Its mission now is to challenge its strongest competitor, BMW, whose Munich headquarters are less than an hour’s drive from Audi’s home in Ingolstadt, also in Bavaria.

Every auto show these days is a derby for the two sports-oriented luxury brands, but this time the confrontation is stronger than ever. BMW is headed into all-new territory with its EV and hybrid BMWi technology and innovative carbon-fiber mass-production know-how.

Audi must prove it also is at the crest of such breakthroughs, and we expect to hear more from the brand in Frankfurt.