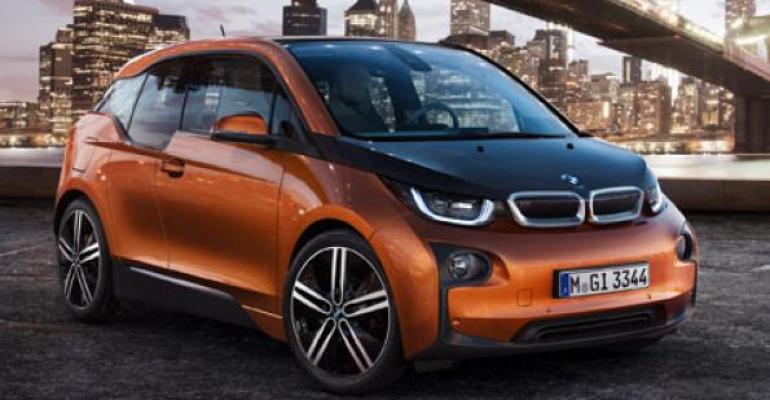 &ldquo;We can build the entire vehicle in 20 hours vs. 40 hours for a conventional vehicle,&rdquo; a BMW executive says. That&#39;s from the time the vehicle parts are stamped in the body shop until the completed EV rolls off the assembly line.

NEW YORK – BMW's futuristic i3 electric vehicle, going on sale in the U.S. next May, not only sports a streamlined design but also streamlines manufacturing.

“It takes half the time to create the carbon-fiber body compared to a steel body,” says Daniel Schaefer, head of product concept at the auto maker’s Leipzig, Germany, plant where the 4-seat electric coupe will be assembled on a dedicated line along with the i8 extended-range version. The factory currently produces the BMW 1-Series hatchback and X1 cross/utility vehicle.

“We can build the entire (i3) in 20 hours vs. 40 hours for a conventional vehicle,” such as the 3-Series,” he says. That's from the time parts are stamped in the body shop until the completed EV rolls off the assembly line.

The i3 body is created with stacks of precast 2-dimensional carbon-fiber panels shipped from supplier SGL Group in Moses Lake, WA, to German press shops in Landshut and Leipzig plants for processing into body parts.

The $100 million plant in Moses Lake, a joint venture between BMW and SGL, makes the carbon-fiber material on two production lines, each with a capacity of 1,500 tons (1,361 t) annually. That's 10% of current global carbon-fiber output.

The carbon fibers start out as polyacrylonitrile (synthetic resin)-based thermoplastic fibers. SGL's process removes extraneous elements, leaving a “virtually pure carbon with a stable graphite structure just 7 microns thick, the auto maker says. A human hair has a diameter of 50 microns. About 50,000 of the carbon filaments are bundled into “rovings” and wound on reels.

The reels are shipped to the Wackersdorf Innovation Park to be made into carbon-fiber laminates. Fiber laminates are not interlaced or interwoven, but lie in the same plane. Weaving would diminish the carbon-fiber properties and reduce their quality.

Workers at Leipzig form 3-D components, pressing male and female parts under a heat source to produce the final shape of the part. The resin differs from that used to construct fiberglass parts, which BMW sources from two suppliers.

Carbon fibers in the material are in a matrix of resin that's injected into presses under a clamping force of 4,500 tons (4,082 t) using a BMW proprietary process that Schaefer declines to detail further. However, it’s similar to that used in aerospace, shipbuilding and the manufacture of wind turbines. The press shop does not bear any resemblance to shops used to stamp steel parts.

A conventional paint shop is not needed nor is cataphoretic immersion priming. Elapsed time to make carbon-fiber parts is a mere 10 minutes. “It takes half the time to create the carbon-fiber body than a steel body,” Schaefer says.

The majority of the i3’s body is made of carbon-fiber material combined with steel and thermoplastics for optimum strength and weight saving. “It's an intelligent mixture,” Schaefer says. “In terms of weight, more than 50% of the body is carbon fiber.” In terms of value, there's an even higher percentage of carbon fiber.

The EV’s seat backs are made of carbon fiber, while other interior parts are made with a high amount of renewable materials. About 10% of the roof contains recycled material from body parts.

Schaefer says the i3 meets all European Union recyclability regulations, with more than 90% of its parts recyclable.

BMW forecasts more than 50% of the electric car’s sales will come with a range-extender engine. Schaefer says that part adds an insignificant amount of time to the vehicle’s assembly. The fuel tank is an aluminum structure in front of the i3 battery pack, which is made of lithium- ion cells from Samsung.

The cells are shipped from Korea to Leipzig, where they are placed in the battery pack, which BMW says will be guaranteed for eight years and 100,000 miles (160,930 km).

BMW Details i3 Grade Strategy Ahead of Global Debut
Jul 29, 2013