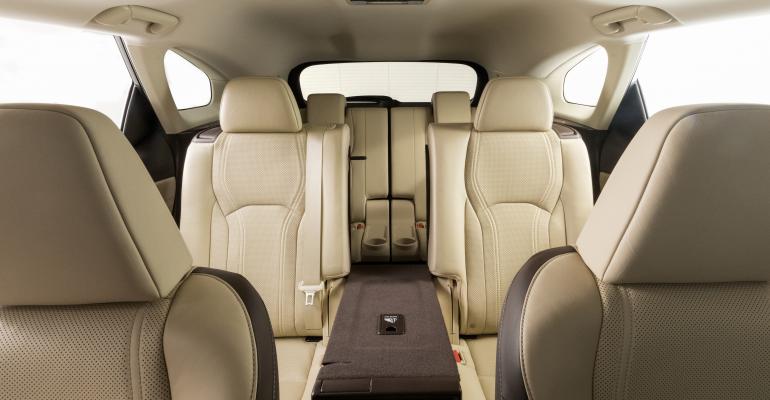 Toyota&rsquo;s luxury marque adds a row to its popular RX midsize CUV and takes a row away from its biggest SUV the LX.&nbsp;

LOS ANGELES – Lexus debuts its long-discussed, longer version of the RX midsize CUV, the 3-row RX L, and sneaks in a surprise with a 2-row variant of its LX large SUV Wednesday at the 2017 Los Angeles auto show.

“Through the mastery of vehicle packaging Lexus extended the body length 4.3 ins. (110 mm) at the rear” to create the RX L, the Toyota luxury brand says in a release ahead of the CUV’s debut today.

The RX is Lexus’ perennial best-seller in the U.S. Its 84,254 deliveries through October represent a third of the brand’s 242,553 10-month volume this year. The brand’s leadership has talked for years about introducing a 3-row CUV as a way to better compete against the 3-row Acura MDX and other 3-row models.

To accommodate the RX’s new third row, and create enough head room for its passengers, the angle of the tailgate window is made steeper.

The outboard sections of the RX’s standard second-row 40/20/40 split-bench seat slide and fold forward via a lever, creating access to the new third row. For RX Ls with optional second-row captain’s chairs, Lexus says third-row users can walk through the open space in between the second-row chairs.

A power-folding third row and a power tailgate are standard features, as are two third-row cupholders.

Third-row seats don’t get the same seat upholstery as the first and second rows, however, as Lexus notes leather-trimmed material is standard only up front, with NuLuxe faux leather on the third-row seats.

The heating, ventilation and air-conditioning system in the new CUV is tri-zone, with separate vents for the third row.

Other features of the RX L include a stowable tonneau cover, covered side rails and a flat load floor behind the third row.

Side curtain airbags that cover all three rows are standard in the RX L, as is Lexus’ Safety System+ suite of advanced technologies, including pre-collision with pedestrian detection, blindspot monitor with park assist and lane-keep assist.

As with the 2-row RX, engine choices include a 3.5L V-6 with Toyota’s D-4S direct and port fuel injection system or a hybrid powertrain mating the 3.5L to two electric motor-generators. The RX L with the former engine is dubbed the RX 350L and the hybrid variant is the RX 450hL.

Major design cues of the RX L mimic those of the 2-row RX, including Lexus’ signature spindle grille and a blacked-out C-pillar.

Cabin materials are similar to those offered in the RX, a 2016 Wards 10 Best Interiors winner, including wood trim of matte bamboo or gray sapele laser-etched to reveal aluminum.

The RX 350L, $47,670 to start, is available in front- or all-wheel-drive while the RX 450hL, with undetermined pricing, has standard AWD. Destination and handling adds $995 to pricing.

Meanwhile, Lexus shrinks the seating in its biggest utility vehicle with a new 2-row variant of the LX announced here.

“Until now, the LX has been offered exclusively as a 3-row utility vehicle for seating up to eight, (but) some customers indicated they did not use the third row and expressed a preference for more interior cargo space,” the brand says in a pre-L.A.-show release.

A roof rack with rails is standard in the new LX and further increases cargo-carrying capability, Lexus says.

The new 2-row LX, with seating for five, will be offered in a single trim level, but with the same standard features (leather seating, 4-zone climate control, power tailgate) as the 3-row LX.

The same 383-hp 5.7L V-8 used in the 3-row LX also is standard, as is its adjustable suspension and Lexus’ Safety System+.

As in the RX L, the 10-year complimentary trial of Enform Safety Connect and Service Connect also is included with purchase of an ’18 LX.