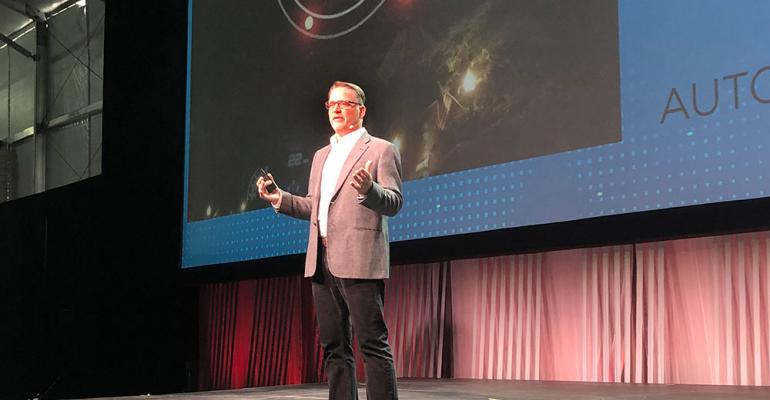 Beyond the technology Honda plans to stuff into its cars for a crash-free future, it is researching ways to make transportation safer for pedestrians, cyclists and the infrastructure.

LOS ANGELES – Dating back to founder Soichiro Honda, the Japanese automaker’s corporate vision has been technology to help people and, as the industry moves deeper into connected and autonomous vehicles, that philosophy has gained strength, says Ted Klaus, vice president and executive engineer at Honda R&D Americas.

“Honda takes a holistic look at the future of transportation,” Klaus says during a keynote speech at AutoMobility LA. “We are all road users.”

That means beyond the technology Honda plans to stuff into its cars for a crash-free future, it is researching ways to make transportation safer for pedestrians, cyclists and the infrastructure, he says.

Klaus says Honda’s $2.75 billion investment in GM Cruise, the autonomous-car unit of General Motors, reflects its commitment to safety, and he reveals the automaker’s R&D campus in Ohio will contribute science to the project. While GM Cruise plans to deploy driverless taxis in the U.S. next year, Klaus says Honda will release Level 3 autonomous technology in 2020 and Level 4 by 2025.

Honda’s connected-vehicle program launched 15 years ago with the release of Safety for Everyone, a global slogan encompassing safety education, technologies to ensure safety and telecommunications networks to enhance safety.

The automaker followed in 2016 with Honda Sensing and AcuraWatch, a suite of driver-assist and active-safety technologies such as adaptive cruise control and automatic emergency braking. Honda has the safety package equipped on 1.7 million Honda and Acura products and expects to reach full deployment on its new cars and trucks by 2022.

Klaus says Honda Sensing and AcuraWatch will unlock future connected and autonomous technologies from Honda, but along the way he says it is important for the company, as well as the industry at large, to be transparent and realistic.

In perhaps a veiled criticism of Tesla’s calling its driver-assist technology AutoPilot, Klaus says the industry should be careful in its characterization of the systems so consumers embrace autonomy rather than run from it.

“For our part, we’ve drawn a line in the sand,” he says. “We’re calling them driver-assistance systems.”

As for the here and now, Honda is working on a project to make intersections safer in Marysville, OH, just a stone’s throw from its sprawling U.S. assembly plant and U.S. R&D home. It is part of a so-called 33 Smart Mobility Corridor using vehicle-to-infrastructure technology. It uses, in short, dedicated short-range communication to eliminate blind corners where the risk of striking a pedestrian is highest.

“With the V2X smart intersection, you can see around corners in an urban environment,” he says, showing a video of how a connected Honda vehicle receives a warning signal from sensing hardware above the intersection. The car than alerts the driver of the pedestrian’s presence.

Another safety technology under development at Honda is called Safe Swarm, which draws inspiration from how a school of fish moves together seamlessly.

“We thought to ourselves, how could we adopt that to real-world transportation,” Klaus says.

Safe Swarm leverages vehicle sensors and smart infrastructure to help motorists merge safely into traffic and looks ahead for road hazards such as a stalled vehicle. It also can sense phantom traffic jams, or those situations where vehicles traveling at different speeds create a backup.

“It’s about giving the connected car time to prepare,” he says.

Safe Swarm will move from Honda R&D to testing at its proving grounds in Ohio sometime next year.

Speaking to its V2X and Smart Swarm technologies, Klaus says the automaker intends to leverage both to their fullest potential.

“But we will also maintain our realistic approach,” he says.