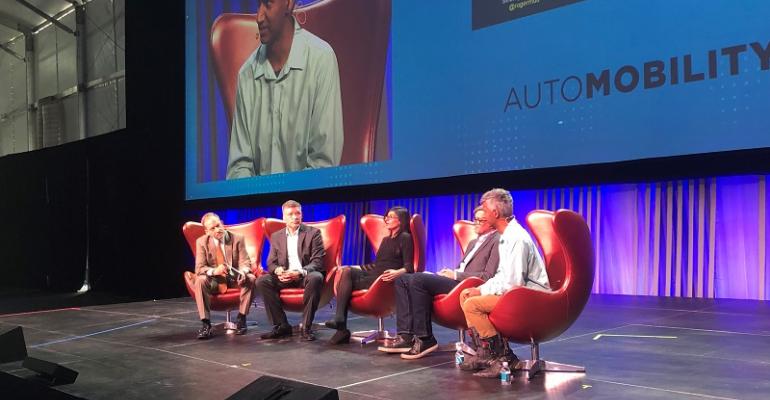 With blockchain ledger changes can be tracked and verified, which makes it good for automotive applications such as insurance and registration, supply chain management, finance and fleet management.

LOS ANGELES – The automotive blockchain holds great promise, but experts warn automakers and suppliers to apply it surgically and only where it may add value to their enterprises.

“People want to apply blockchain to everything, but we need to make some decisions where it does apply,” says Naghmana Majed, leader-Automotive and A&D Solutions, at IBM.

“What is the business model? Is there a clear business value, especially in the realm of new revenue opportunities? Technology for technology’s sake does nothing for anyone,” she tells an AutoMobility LA panel on blockchain technology in the automotive industry.

The blockchain is a data tree, or distributed ledger, managed by a peer-to-peer network. Once data is recoded on the blockchain, it cannot be altered without a consensus of the network. Changes can be tracked and verified, which makes it good for automotive applications such as insurance and registration, supply chain management, finance and fleet management.

One example: A pilot program to track cobalt, mined from artisanal sources in the Democratic Republic of Congo and bound for use in the lithium-ion batteries of electrified vehicles, will use blockchain to ensure it was extracted responsibly.

Since the data on the blockchain is de-centralized, it also is viewed as a more trustworthy document and less susceptible to hacking.

The blockchain shot into public consciousness with the crypto-currency Bitcoin, a decentralized digital currency that relies on the technology’s distributed ledger to track and verify transactions. Investors flocked to the promise of Bitcoin and smaller crypto-currencies, running their stock prices to the moon.

But questions have emerged around the future of crypto-currencies and the skepticism has spilled over into other industries, including automotive, where its application would not be currency-based but as a shared and encrypted database.

Rahul Sonnad, co-founder and CEO of Tesloop, which operates a car-sharing platform for efficient data exchange and blockchain-based crypto-economic interactions, questions a chief tenet of the technology, trust, in traditional businesses.

“Trust is not an issue,” he offers. “Companies have been trusting each other for thousands of years.”

In automotive applications, the blockchain also faces latency issues, a major technical hurdle to its deployment. It simply does not work as quickly as current methods for helping dealers track used-car inventory, for example.

But with 250 million connected cars expected to prowl the world’s roadways by 2020 and the 20 million connected devices around the world doubling every few years, there could be a large role for blockchain to play in protecting transactions and even pushing over-the-air updates down to suppliers from automakers.

Chris Ballinger, CEO and Co-founder of MOBI, a software to centralize, comprehend and control mobility programs by integrating with other stakeholders such as wireless carriers and corporate IT systems, previously worked in finance at Toyota and says the blockchain could have efficiently reconciled transactions between the automaker and various partners.

He says common standards for the application of blockchain in automotive would go a long way to eliminating latency, as well as currently high costs of its implementation.

“That would change things by an order of magnitude,” he says.

Rick Gruenhagen, chief technical officer at Spireon, a cloud-based GPS vehicle tracker and fleet manager, says the promise of blockchain will be realized only when the industry buys in.

“If it is to work, everybody needs to embrace it,” he says.