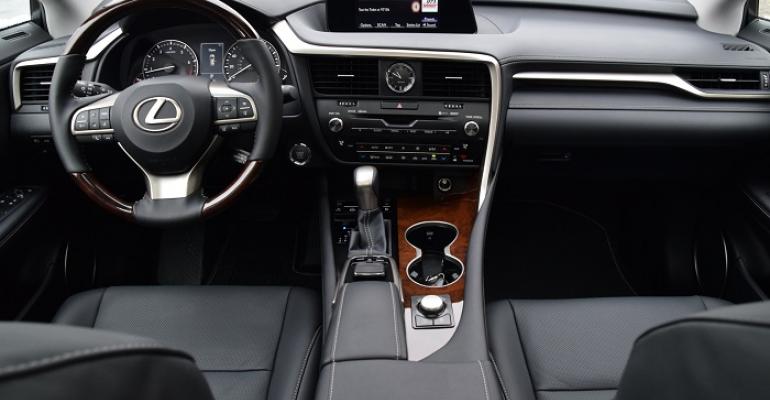 Our judges&rsquo; socks are knocked off by the &rsquo;16 RX 350&rsquo;s lovely mix of materials and fantastic content, all for a relatively reasonable price.

The Lexus RX has been the longtime sales leader among luxury CUVs, selling roughly 100,000 units annually in the U.S. since its second generation debuted 12 years ago.

But, to be frank, it has been a success in spite of its interior.

The old RX cabin was OK, but with abundant glossy wood trim and curving, unadorned expanses on its instrument panel, it had a dated definition of luxury.

However, with the fourth-generation RX, Lexus has stepped up its game, dialing back the wood trim, upping the metal quotient and introducing visually appealing shapes and user-friendly technology.

Although our $52,968 RX 350 all-wheel-drive test vehicle is on the lower end of the ’16 RX lineup’s pricing spectrum, its interior certainly doesn’t suffer for it.

Our judges’ socks are knocked off by the cabin’s appearance and content relative to its cost. Many mass-market CUVs exceed $50,000, but lack the quality interior of the RX.

Echoes of that grille are present in the center stack’s single piece of decorative metallic trim, which runs up the right side of the stack, turns left, then heads northwest toward the gauge cluster.

The RX has “some unexpectedly bold design flourishes on the instrument panel,” notes judge Tom Murphy, who also points out the shape of the metallic trim on the CUV’s front door panels is a dead ringer for the brand’s F performance sub-brand logo. It’s a cool way to reward buyers of a lesser-priced model, while reminding them of Lexus’ new, more athletic bent.

We also love the intersecting white stitch lines on the front door panels, dressing up the space between the armrest and window that in many vehicles is left unadorned.

While it’s been around since the last-gen RX debuted in 2009, many judges find the computer-mouse-like remote-touch controller in the ’16 RX a big improvement.

“Say what you want, but I like the mouse,” declares judge Dave Zoia. “And the amount of physical buttons and dials here easily makes up for any deficiencies of on-screen menus.”

The mouse’s arrow precisely latches on to available menu items, unlike previous versions of the system where it was difficult to isolate an on-screen icon. Plus, the sensitivity of the mouse can be adjusted for customer preference.

While our RX lacks flashier available items, such as sapele-wood trim mixed with aluminum found in the CUV’s luxury package or the red-leather seats in the F Sport package, the $53,000 AWD 350 is a testament to Lexus’ propensity to offer incredible value for the money.