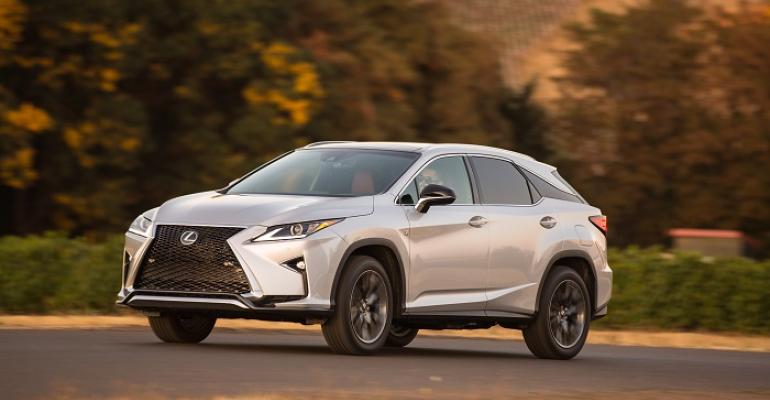 If the &rsquo;16 RX were a Thai dish we&rsquo;d dub its level of heat &ldquo;mild-plus,&rdquo; with aggressive new sheet metal balanced out by light updates to its sport quotient.

PORTLAND, OR – With the third-generation ’09 Lexus RX, the brand delivered a model similar to the second-generation CUV it replaced.

Styling barely was changed, as brand executives said owners liked their RX just the way it was.

That if-it-ain’t-broke-don’t-fix-it attitude extended beneath the sheet metal, where engineers firmed up the suspension and steering just a smidge.

Fast forward more than six years and the launch of the fourth-generation RX is upon us.

But now Lexus executives, prodded by Toyota CEO Akio Toyoda to make vehicles more exciting across the board, are singing a different tune.

Yes, the new ’16 RX launching in the U.S. in November once and for all is trying to shake its image as a jellybean-shaped soft-roader loved by upper-middle-class soccer moms.

To gain a little bit of the performance cred enjoyed by the German CUVs (Audi Q5, BMW X5 and Mercedes M-Class), Lexus says it has imbued the new RX with sportier tuning, especially for its F Sport trim level.

And in a break from design tradition, the RX is dressed up with more angles than an episode of 48 Hours.

However, excluding design, after driving three new ’16 RXs here we find the midsize CUV to be a familiar package, not nearly the performance monster brand managers want you to believe it is.

But that’s not a bad thing.

The RX is a more well-rounded CUV than those offered by German competitors erring toward athleticism rather than comfort. It also offers more progressive looks than the German CUVs treading water on design.

Like last year’s new NX compact CUV, the RX has some athleticism, but overall is sport lite.

Its ride still is like driving on air, although the near-perfect roads of Portlandia don’t challenge our test vehicles’ suspensions.

When summoning more torque, either by flooring the accelerator or downshifting via paddles or the shift lever, the RX delivers more oomph gently so as not to scare you. We find this to be true no matter if we are behind the wheel of F Sport or non-F Sport RXs, and even if the drive-mode selector in the former models is dialed into Sport+ mode, which is supposed to bring about more responsive acceleration at intermediate throttle positions.

The RX keeps its MacPherson-strut front and double-wishbone rear suspension setup, but up front adds a larger-diameter, hollow front stabilizer bar and now has lower coil-spring rates. In the rear, the lower No.1 arm-bushing rubber is hardened and adds an internal ring to increase the spring rate.

The RX is equipped with Toyota’s newest V-6, the 2GR-FKS. Debuting this month in the new Toyota Tacoma pickup and soon in the refreshed Lexus GS sedan, the 3.5L engine uses the Japanese automaker’s D-4S port- and direct-injection system in combination with new intelligent variable valve timing with a wider range of intake-cam control, able to switch between Otto and Atkinson combustion cycles.

Furthering our torque gripes, while total torque increases vs. the outgoing V-6, the peak remains at a relatively high 4,700 rpm. Again, BMW wins, with the I-6 boasting more torque, as soon as 1,200 rpm.

As in the Tacoma, the engine is smooth and competent, but doesn’t project much personality. Excessive engine noise that we found in the pickup is nonexistent in the predictably vault-silent RX, with its scads of insulating materials to quell noise, vibration and harshness.

The standard transmission for the non-hybrid RX is an 8-speed automatic, formerly only on the F Sport in the outgoing third generation. Outgoing base RX 350s came with a 6AT.

The outgoing RX 450h’s nickel-metal-hydride battery pack is carried over but has a more compact shape. The main body is lowered 1 in. (26 mm), allowing for thicker padding on rear seats.

Color us disappointed the EV mode in the RX gives what the EV mode in the ’10 Prius gave in 2009: roughly 20 miles (32 km) of range at speeds below 25 mph (40 km/h). And that only is possible if the battery is sufficiently charged. Oh well. Likely the forthcoming fourth-generation Prius will see a longer, more robust EV mode that will filter down to the 450h.

Combined fuel economy for non-hybrid models is estimated by Lexus to increase 2 mpg (0.9 km/L) over ’15.

Attractive Inside and Out

The X5, Q5 and M-Class are handsome vehicles, but haven’t changed much over the years.

So Lexus deserves kudos for taking a risk, especially with a vehicle that accounts for a third of its annual U.S. volume.

If you don’t like the RX’s new look you can thank Akio Toyoda, who deemed a supposedly finished exterior design not extreme enough and sent the vehicle’s stylists back to the drawing board.

That commitment to appearance pays off. There’s nary a surface without something going on. Some may call it overwrought, but the look melds.

We love the floating C-pillar, although Nissan did it first on the Murano.

As with most new vehicles, Lexus says the ’16 RX is stronger and more rigid than the generation it replaces, thanks to high-strength steels, aluminum bits (hood and rear door) and abundant laser welds and structural adhesives.

The car’s interior lives up to the promise of the exterior.

Interesting new colors and materials, including lovely Rioja Red leather for the F Sport and a unique laser-etched aluminum and sapele wood trim, are winning touches.

Prompting the question how much bigger can they get, there’s an available 12.3-in.- (31-cm)-wide display screen, operated with a tweaked version of Lexus’ remote-touch controller.

Seating comfort is high in both front and back seats, although the optional, giant, 11.6-in. (29-cm) rear-seat entertainment screens, affixed to the back of the front seats, cause claustrophobia. Fortunately they tilt back to open up breathing room.

Another cabin criticism is Lexus-typical heavy lacquer on some wood trims, at odds with industry trends toward open-pore veneers. Let this wood breathe!

We also struggle to get the voice-recognition system to understand our commands, but sadly that’s not exactly an atypical experience in today’s vehicles.

For all its advanced technology, including a safety system that warns you to pull over when it detects you’re sleepy, most amusing is a decidedly low-tech item: a console-mounted cupholder with a movable floor. Pushing down on it lowers the floor, keeping tall cups from wobbling. A button within the cupholder raises it. Genius.

Pricing hasn’t been released, but Lexus officials indicate the midsize luxury CUV will continue to begin “well under” $45,000.

While it could stand a bit more sport, we say the Lexus RX still is the midsize luxury CUV to beat.