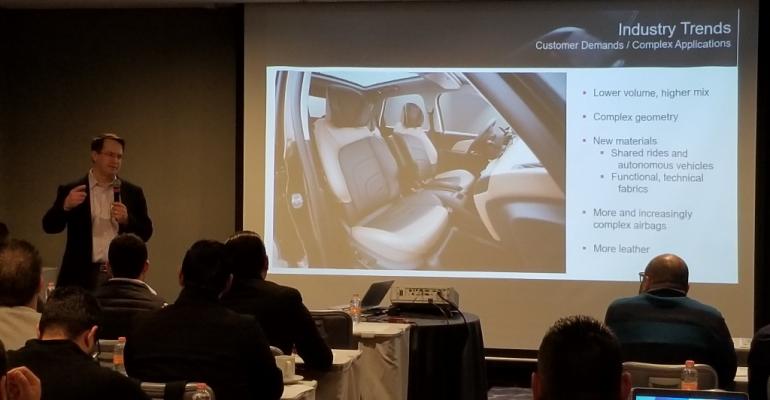 Lectra Reaches Out to Mexican Customer Base

In Mexico, Lectra has hundreds of cutting machines deployed for customers working in the auto industry. &ldquo;We have more machines in Mexico than any other place in the world, with the exception of China,&rdquo; Vice President Dan Wilson says.

MONTERREY, Mexico – French cutting machine supplier Lectra takes its Performance Optimization Tour on the road, seeking to help its customers make the most of processing fabric, airbags and leather for automotive applications.

The publicly traded company manufactures machines that use lasers, knives and razors to cut material, and automotive makes up more than 40% of its $300 million annual revenues. It’s the worldwide No.1 player in the segment. Sales to automakers and suppliers also represent the company’s fastest growth rate – up 60% since 2012.

In Mexico, Lectra has hundreds of cutting machines deployed for customers working in the auto industry and some 40 technicians who serve those customers with preventive and predictive maintenance and help maximize machine potential.

“We have more machines in Mexico than any other place in the world, with the exception of China,” Dan Wilson, vice president-automotive sales for Lectra North America, tells a crowd of about 50 customers this morning. Wilson estimates there are a few hundred Lectra machines in Mexico.

“We are here to visit your sites so you can get the most of your investments,” he says. “We have the expertise and resources to help you transition from older machines to new technologies that will help your companies respond more quickly to market needs and differentiate from your competition.”

The need for sophisticated technology has never been greater, as automakers are demanding complex cutting patterns that make their seats, door panels and other fabrics stand out in a particular segment, Wilson says.

That complexity cannot add cost to the manufacturing process, either. Lectra has a series of new machines that can meet various price points – the most expensive being the Focus Quantum laser cutter for airbags, which costs about $2 million.

But less expensive are the iX series of knife-based cutting machines. The iX9, for instance, can cut 30 layers of fabric at one time and save up to 5% in material costs while boosting throughput, performance and quality, Wilson says.

Factor in those improvements and the investment in a new cutting machine can be paid off within two years, he says.

However, those investments don’t come easily, as many customers have been using the same machines for 15 years. The majority of Lectra’s customers use computer-controlled knife-based cutting machines, but many continue to use conventional die presses.

Switching to a new die, which can cost more than $20,000, can take a machine offline for about 20 days. But a digital cutting machine can be reprogrammed for a new procedure within a day, saving significant time and money, Wilson says.

The migration toward digital manufacturing is part of the company’s push toward Industry 4.0, in which smarter machines are linked with technology and able to communicate important data for optimizing production, he says.

Lectra has 1,600 employees worldwide, including 270 engineers at its technical center in France. All the company’s cutting machines come from Cestas in Bordeaux.