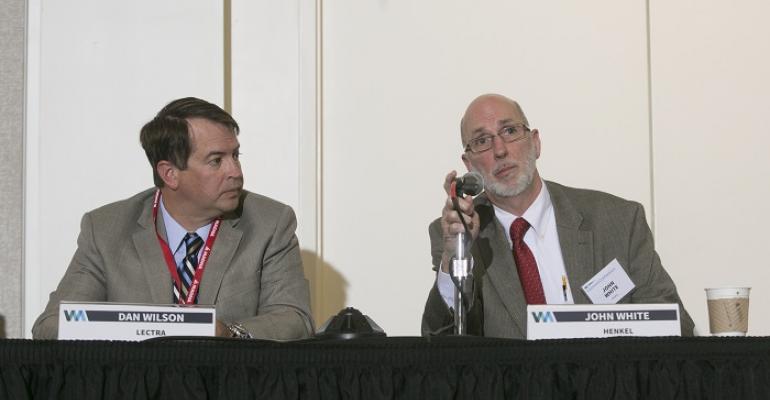 DETROIT – Quieter, less-expensive-to-manufacture interiors are the Holy Grail for suppliers and OEMs alike.

While your average compact-car interior still is louder in decibels than a dishwasher, progress is being made, says a panelist at the “Manufacturing World-Class Interiors” session at the 2017 WardsAuto Interiors Conference.

Too much cabin noise can negatively impact how buyers perceive vehicle quality and make it difficult to engage in conversation with passengers or be understood by voice-recognition systems, says Ernie Wilson, vice president-Advanced Development and Engineering for IAC’s Soft Trim and Acoustics unit.

In the past, suppliers and automakers exclusively used barriers to keep sound out. However, those barriers added weight to vehicles.

“As we’ve got better with noise control, now we’re starting to absorb sound,” Wilson says. “What we’re finding is the optimum is a combination of both systems.”

Designing insulators that perfectly fit under floors and behind dashes go a long way toward reducing unwanted noise, either airborne or caused by vibrations of a vehicle’s structural elements, IAC’s Wilson says.

The holes in dash insulators, pass-throughs for various instrument-panel-mounted controls and wiring, can be a major entry point for noise intrusion into a vehicle cabin. To remedy this, IAC developed for a German automaker a dash insulator with foam on both sides to improve pass-through sealing.

He also speaks to the importance of material thickness, noting thin trim pieces can benefit from sound-absorbing materials beneath the surface.

Electric vehicles represent a challenge, as the lack of engine noise can exacerbate road and wind noise, Wilson says, noting that after tearing down current EVs, IAC discovered underfloor-mounted batteries to be the best placement for acoustic reasons.

So far, EV manufacturers are doing a pretty good job of reducing cabin noise, with the Ford Fusion Energi determined by Lectra to have the lowest interior decibel reading, 57.94, vs. 62 dB for a comparable gas-engine car, 70 dB for a compact car interior or 120 dB for a plane taking off.

At Lectra, the focus is on reducing waste and manufacturing time and speeding up products’ time to market. With that in mind the technology and equipment provider for textile companies touts its Cutting Room 4.0 platform that runs in its customers’ production facilities and allows for real-time communication between and outside the facilities four walls.

If patterns can be drawn and cut to bring about less wasted material, it could mean a savings of 5%-10% across an automotive program, says Dan Wilson, sales director-Automotive for Lectra.

The supplier only has scratched the surface of the possibilities with Cutting Room 4.0, Wilson says, noting current-generation equipment has 200-plus sensors on it “pumping out data.

“The next evolution for our customers is in making use of that data. Right now we often term it ‘data jail.’ There’s tons of data, but what do we do with it?”

Lectra hopes it can reduce product-cycle time so much so that “when someone chooses the leather seats in a car, a cow gets nervous,” Lectra’s Wilson says.

At Henkel, its Acquence PL 5101 P waterborne plastic-laminating adhesive is promoted at as a way to lower build time and costs as it is just a one-component instead of two-component adhesive.

John White, lead research chemist-Adhesives for Henkel, says it can save process time and thus money on foils laminated to polypropylene and which decorate floors, instrument panels and console panels.

Shorter curing time, drying time and activation time than a two-component adhesive are key benefits of PL 5101 P. And unlike a two-component adhesive, the one-component PL 5101 P doesn’t require the careful measurement, mixing and induction of a cross-linker in addition to the common steps of spraying on an adhesive, drying it at room or elevated temperature and assembling the substrate.

An employee must perform the mixing and induction before the start of a shift, White says, adding, “You probably have to mix more than you need to not stop the line prematurely before the end of a shift.”

Other benefits of PL 5101 P are the ability to apply it up to 10 days before bonding, as well as curing that begins immediately when heat is applied.