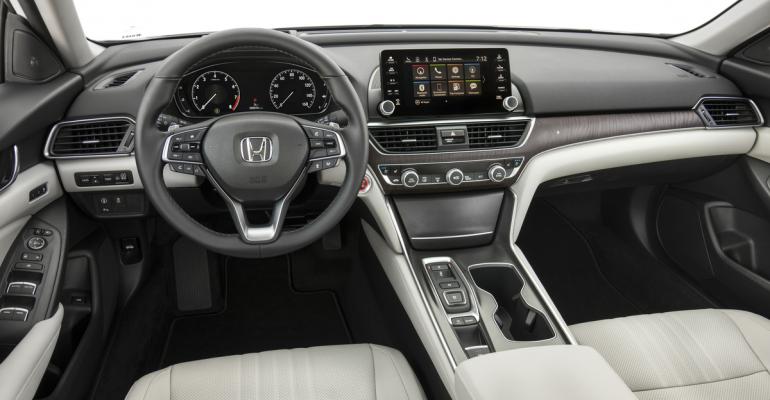 Honda Accord Interior Opens Up

It was a deliberate decision not to use colors that contrast strongly against the Accord&rsquo;s ivory, gray or black seating and trim choices.

DETROIT – A clean, open, sophisticated cabin conveying the redesigned sedan’s more athletic nature is what Honda was aiming for inside the new ’18 Accord.

The task of creating the interior for the upcoming 10th-generation 4-door fell to Yosuke Shimizu, interior designer for Honda and whose last project was overseeing the Acura NSX supercar’s passenger compartment.

“So the biggest mission for the new Accord was creating an interior space that really expressed that fun-to-drive feeling,” he tells WardsAuto here at an Accord event via an interpreter.

This is achieved by pulling the car’s A-pillars back, which Shimizu, almost 37 and a 14-year veteran of Honda, says improves visibility so a driver can better see the road.

And while moving front seats inward so driver and passenger sit closer to each other may seem counterintuitive when a goal is to create open space, Shimizu infers it lends an airiness to the outer edges of the Accord’s cabin.

“In previous Hondas, when we wanted to make the cabin more spacious, we’d actually move the people further apart,” Shimizu says. “This time, by moving them a little closer together, it created more of that overall interior feeling of space and that helped to create the overall cabin environment.”

Also making the Accord’s cabin feel more voluminous is a less-bulky instrument panel, referred to in Honda press materials as having an “ultra-thin profile.”

The IP’s vertical height is lessened, partially due to new safety technology such as knee airbags, the designer says.

“We were able to make more space underneath, more space around the knees, so that really helps to make the instrument panel more concentrated – it’s a shape that’s stronger, more comforting,” he says, adding the thinner IP also expresses a sense of dynamic performance.

The Accord lacks louder colors in its interior unlike the redesigned Toyota Camry or the refreshed Hyundai Sonata midsize sedans, which use red and blue, respectively, as main or accent colors.

Shimizu says it was a deliberate decision not to use colors that contrast strongly against the Accord’s ivory, gray or black seating and trim choices.

“We wanted to make something that felt very simple, very clean, so we deliberately kept it sophisticated,” he says.

Faux metal and wood trim again are available, but Shimizu says the wood trim in the ’18 model is more realistic as it undergoes a printing process that results in four layers of material to create a wavy surface.

As it has done with most recently redesigned Hondas and Acuras, the Japanese automaker reworks the car’s controls, specifically its touchscreen, to make them more user-friendly.

WardsAuto spots narrow, redundant hard buttons (see short white lines on screen below) placed on the far left and right of the ’18 Accord’s touchscreen, where the most common controls live. They make feature misapplication – when you mean to hit one thing but you accidentally select something else – less of a concern. 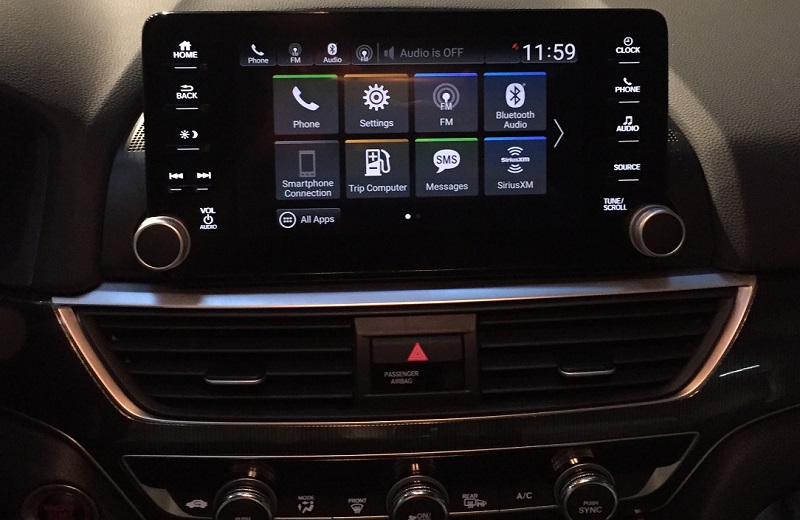 Also in the realm of physical controls is a new tune knob, joining a volume knob. Honda controversially removed both knobs from some of its models a few years ago in favor of touch controls.

The touchscreen itself is wide and placed high atop the center stack, within easy reach of the driver. Like the new Odyssey’s touchscreen, app tiles can be rearranged to suit a driver’s preferences, and shortcuts to the most commonly used items can be placed at the top left corner of the screen.

The new ’18 Accord is due to arrive at Honda dealers in the U.S. this fall. Honda has dropped both the coupe body style and V-6 option, going all 4-door and all 4-cyl. for ’18.

Accord sales through June fell 5.5% from first-half 2016, although that’s a less-steep falloff than the 18.5% decline in the Lower Middle Car segment, WardsAuto data shows.

Honda Expects to Maintain Market Share with Accord
Jul 19, 2017