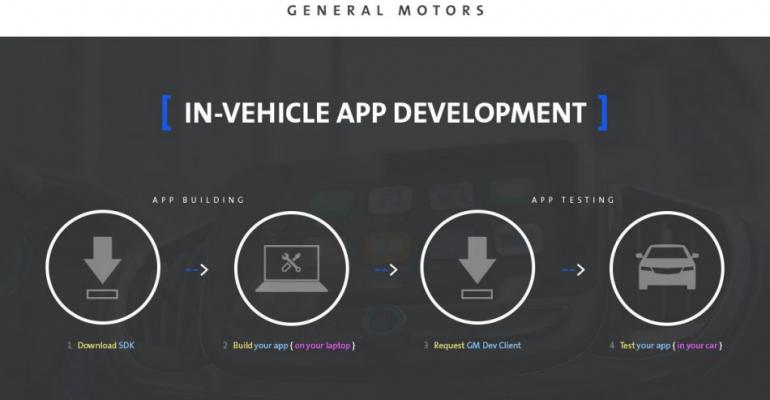 GM Dev Client gives approved developers the ability to test their creations in a GM vehicle without meeting with the automaker and instantly make changes, or updates, to their apps on the fly.

General Motors rolls out the red carpet for software application developers hoping to get their creations into the 10 million cars and trucks the automaker sells annually around the world with GM Dev Client, an app itself that can be used for on-the-fly testing.

“GM Dev Client will help us and external developers make sure the best in-vehicle apps are ultimately made available in GM vehicles, ensuring the best customer experience for drivers,” he says in a statement.

GM Dev Client underscores the impact electronic devices have had on the automotive industry. Consumers are increasingly accustomed to having their favorite technology, whether it is information or entertainment, available at their fingertips, or via a quick download, wherever they go. Automakers are responding by adding apps to in-vehicle infotainment systems, but it can take years for them to bring a new car to market while new apps arrive every day.

GM Dev Client, which the automaker considers an industry-first, could significantly narrow that gap by giving approved developers a tool to test their creations in a GM vehicle without meeting with the automaker and instantly make changes, or updates, to their apps on the fly. Getting the latest-and-greatest app to consumers quickly could give GM a leg up on its rivals at a time when connectivity and the user experience have become key selling points.

Here’s how it works: after building a proof of concept using a software development kit (SDK) released earlier this year by the automaker, a developer can move to the next step of testing an app on the infotainment system of a GM vehicle through the GM Dev Client app. Testing requires approval from GM and the app only works on compatible ’17 and ’18 GM vehicles, or about 20 cars and trucks.

A built-in lockout function is included so only passengers can test the app while the car is in motion. The function can sense when a passenger is present, otherwise GM Dev Client can only be used with the car in park.

GM Dev Client is not available to all developers and they are closely vetted, GM says. Apps under consideration also must create a safer and more satisfying experience, the automaker says.

Developers testing their apps using GM Dev Client have access to an industry-leading nearly 400 simulated data points such as network connectivity, vehicle location and speed and even tire pressure.

“Sharing more emulated data points through the SDK than any other automaker was the first step in opening the door for developers,” says Kent Helfrich, executive director-Connected Ecosystem Integration at GM. “After such strong adoption of the SDK, we wanted to enable developers to take the next step and allow real-world testing in our vehicles.”

App Aims to Curtail iPhone Use While Driving
Jul 05, 2017