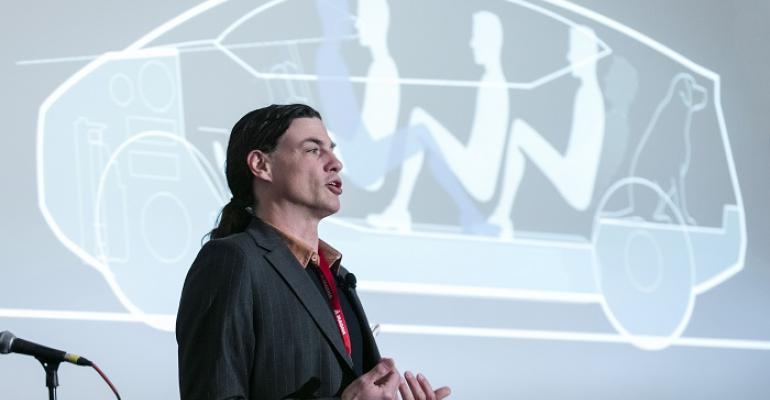 DETROIT – With the mindset that its latest iteration of the Ridgeline compact pickup needed a wow factor, Honda set to work thinking one up.

What they came up with, an industry-first in-bed audio system, is just one of a few ideas that could shape the light-truck interior of tomorrow.

Speaking on a panel at the 2016 WardsAuto Interiors Conference here, Steve Behm, project leader-bed systems for Honda R&D Americas, says Honda challenged its team to find “the new thing we can bring to market that nobody’s seen before.

“We put that problem to our team internally and sort of riffed on that,” he says.

While some ideas fell by the wayside, a proposed in-bed audio system had legs and got greenlit for the ’17 Ridgeline arriving at U.S. Honda dealers next month.

The system, not unlike outdoor audio systems with exciters that go beneath decking, uses six exciters to stimulate the Ridgeline’s bed panels to create vibration and push out sound.

“Most speakers have a magnet, the magnet drives the cones…the cones are the bed panels themselves,” Behm says of eliminating a speaker for an exciter.

The speakers, combined with the Ridgeline’s returning in-bed trunk and a new 400W AC outlet, make the pickup suitable for fun times like tailgating, as well as work hauling light loads.

Meanwhile, Hyundai’s Andrew Moir, interior design manager based at the automaker’s California design studio, and Dino Nardicchio, global vice president-R&D for Magna Seating advise that as Americans are aging, making getting in and out of a vehicle easier will be important.

But both men say regardless of the features that enable easier ingress and egress, they can’t be a turnoff.

“(Buyers) don’t want the stigma of (products for their diminished ability), so you definitely want to design for the needs of the people, but you have to make it desirable,” says Moir.

Adds Nardicchio: “There is a stigma associated with these geriatric-type features.”

Designing light-truck interiors suitable for buyers in different global markets also will be a focal point going forward, with Nardicchio noting thigh extenders could become more common as they are a way to use one seat type to accommodate people of varying weights and heights.

“The general trend is, people want the seat to fit them,” he says.

Autonomy may further require an interior rethink, with driverless-vehicle capability impacting the person sitting in what now is the driver’s seat.

“The early stage of autonomy the driver is still going to be sitting forward and still have a steering wheel,” Moir notes, adding a driver now can anticipate movement but “maybe there’ll have to be some sort of interaction with the vehicle so you can brace yourself.”

Both Hyundai’s Moir and Honda’s Behm say idea creation happens internally at their automakers and collaboratively with suppliers, but even with the former scenario they still like to hear and see supplier innovations.

“I guess my advice would be to continually leverage that relationship…even when that application is not so clear,” Behm says, adding an idea brought forth for project A which can’t be used could be suitable for project B or C.