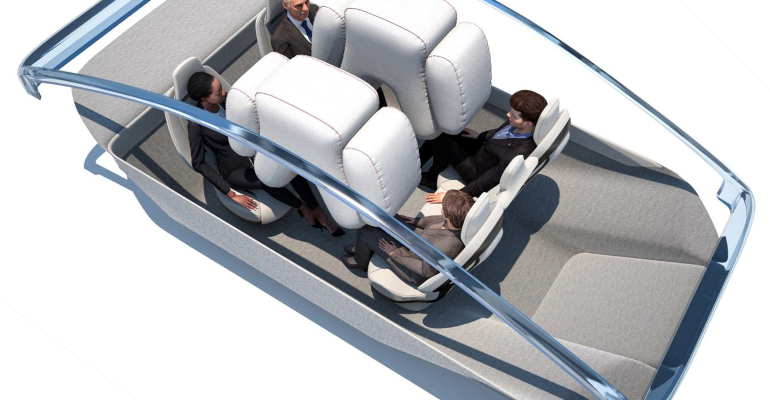 Autonomous Cars Will Need Airbags and Seatbelts for Foreseeable Future

As reality settles in, autonomous-vehicle interiors are being designed to calm nervous passengers and withstand severe crashes.

Autonomous vehicles usually are depicted with passengers lounging in lavish cockpits that look like living rooms. They have seats that spin around and turn into beds. The message is that in the future, AVs will never crash or make occupants nervous.

That dream may come true someday, but for the next few decades, AVs will share roads with conventional vehicles driven by fallible human drivers. For the foreseeable future, there will be crashes, AVs will be required to have seatbelts and airbags, and many riders will be fearful of robot cars.

Speakers at the recent WardsAuto Interiors conference pulled back the curtain on these emerging realities and described future self-driving cars as comfy and advanced – but closer in design to today’s vehicles than the futuristic concepts currently being shown off.

And they will be designed specifically to ease the fears of anxious passengers and to protect awkwardly positioned occupants in the severest crashes.

Rich Matsu, senior director-Engineering at safety systems supplier Autoliv, predicts that 10 years from now, only 1% of vehicles on the road will be fully autonomous with the remainder mostly Level-1 or -2 and only 10% at Level-3 or -4.

Matsu sees the installation of safety systems such as airbags increasing – not decreasing – as AVs become more common and crash safety becomes more complex. He shows off a variety of airbag concepts that surround reclining occupants like a cocoon or shoot up from the floor between two facing seats.

“Highly automated driving may force us to reinvent our company, but we do not believe for the foreseeable future that it will be accident free,” Matsu says. 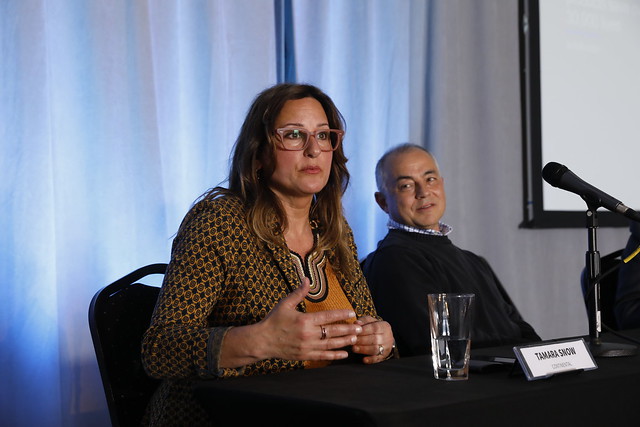 Autonomous vehicles can solve these issues and the advanced driver assist systems currently being installed on new vehicles already are saving lives and providing the building blocks for ultra-safe autonomous driving in the future, Snow says.

Even so, many consumers still are wary of these new technologies and distrustful of self-driving cars.

In a session titled “Designing Specifically for Fully Autonomous Vehicles” Snow and Matsu describe a cockpit development process that is more deliberate than what is seen for other disruptive technologies.

Silicon Valley slogans such as: “If you’re not breaking stuff, you’re not moving fast enough,” must be tempered when it comes to maximizing passenger safety, Matsu says. Going through a disruptive phase is necessary for innovation, but that needs to be followed by a cautious implementation stage before vehicles enter the marketplace, he says.

“Where do you put an airbag if the seat spins around?” Matsu asks, showing examples of airbags that pop out of the sides of seats or partially envelope the seat occupant.

Future safety systems also will use electrically powered seatbelts plus sensors to detect the size and age of occupants to prevent too much force being applied.

The first concern is building consumer awareness and trust of the new technology, something that has been accomplished many times in the past. Snow points out that people don’t think twice about getting into automated elevators, even though they once all had human operators.

Developing trust is all about curating the information shared with passengers, Snow says.

“If we had shown elevator passengers all the cables and mechanics behind the operation of the elevator, it’s likely many would never have gotten on, so we have to think about what information we share and when and what format.”

For Continental, this boils down to what it calls a “holistic user interface” where the focus of the AV cockpit shifts from simply automating driving to becoming a total human-machine interface that includes comprehensive driver and passenger monitoring as well as advanced driver assist systems and other features.

“Outside the vehicle are very complex situations and you have to understand the driving environment. There are traffic signs, lane markings, construction, vehicles, pedestrians and other cars. Just like the elevator example, the car sees everything, but we must curate what we show to vehicle occupants,” Snow says.

As interior systems become more complex, they will have to digitally integrate built-in and brought-in systems such as personal devices even more than they are now.

One of the bottlenecks currently being worked on for connected systems is the multiplexing of control for the acoustic, visual and haptic interfaces with users so they can be prioritized and override each other when necessary for safety or a better user experience. One easy example is how current navigation instructions temporarily interrupt music.

There are many other difficult human-machine interactions that will crop up as AVs come closer to commercialization, the panelists agree. Session moderator Sam Abuelsamid, principal analyst at Navigant Research, points out new challenges will include robot taxis that can effectively assist elderly or disabled people enter and exit vehicles.

As autonomy creates more ways for seats and interiors to be configured, Matsu says there will have to be a major shift to more simulation testing and predictive engineering tools.

“We can’t have just engineers working on these solutions,” adds Snow. Continental has a whole group of psychology-based and human-factor-based experts working on this and dealing with atypical events. “We’re not experts on how to determine if someone is having a heart attack,” she says.