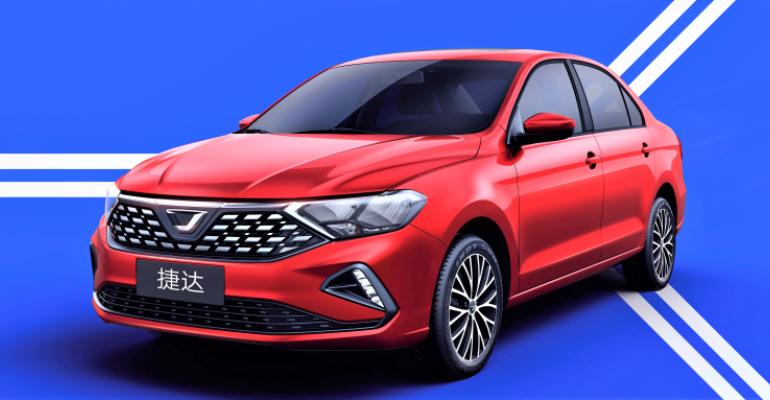 Volkswagen announces the creation of a new brand in cooperation with its longtime Chinese joint-venture partner FAW under the Jetta name.

“With Jetta, we are closing the gap between the established Volkswagen lead brand in the top volume segment and entry-level mobility, which accounts for about one-third of the Chinese market and is served mainly by local brands,” says Jürgen Stackmann, member of the Volkswagen brand board of management responsible for sales.

“This way, we will significantly increase our market coverage.”

In announcing the creation of the new brand, Stackmann reveals a unique Jetta logo featuring a stylized “J.” It is to appear on all new Jetta models as well as a network of standalone Jetta dealerships to be established throughout China.

Volkswagen says the Jetta dealership network will be supported by a range of sales formats, including digital showrooms, shopping malls and mobile sales trucks. By the end of 2019, it plans to establish up to 200 dealerships.

The initial Jetta lineup will comprise three models, the VA3, VS5 and VS7. Sales are to start in the third quarter.

Unlike its Volkswagen sister brand Skoda, SEAT does not have an existing sales presence in China. By integrating the Spanish automaker’s models into the new Jetta lineup, it is expected to profit from greater economies of scale.

A smaller VS3 model based on the SEAT Arona has been mentioned as a possible future addition to the new Jetta range.

Speaking about the idea behind the new Jetta brand, Stackmann says: “In China, the Jetta plays an extremely valuable role for us as a Volkswagen model. It has brought mobility for the masses, just like the Beetle once did in Europe. Developed by Volkswagen and built in China, the Jetta has placed China on four wheels. To this day, it is one of Volkswagen’s most popular models in China – a real icon.

“This is why we are transforming a model into a brand and establishing a separate model and brand family.”

All three initial Jetta models are to receive a common corporate grille treatment, as previewed by an official sketch of the VA3 provided by Volkswagen. They will be produced at a joint venture factory operated by Volkswagen and FAW in Chengdu, China.