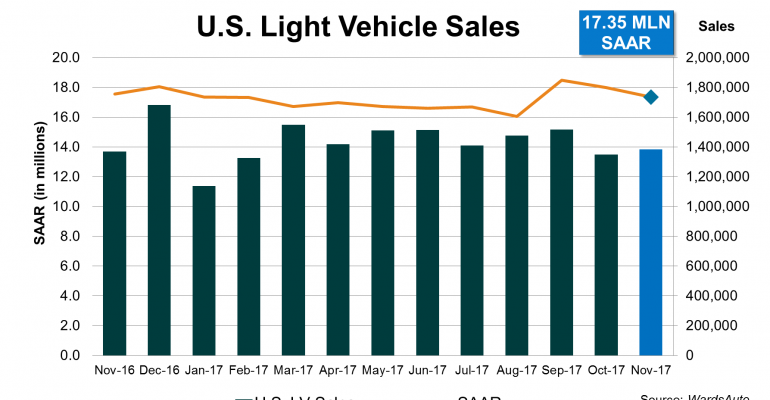 If the redesigned Accord replicates the success of the new Camry, the midsize-car group just might become a 2-vehicle segment.

U.S. light-vehicle sales continued above trend in November, posting a 17.3 million-unit seasonally adjusted annual rate, the third straight month results heavily topped the 16.8 million SAAR the industry was tracking toward in 2017 prior to September.

Strong economic fundamentals, including two straight quarters with GDP growth above 3% for the first time in several years, are helping buoy sales. But the main driver to above-trend levels is an abundance of ’17 models on dealer lots, and automakers continue to pare unwanted inventory before the end of the year, witnessed by incentives rising faster than average transaction prices.

Also helping boost volume is estimated fleet demand, which increased year-over-year for the third straight month after declining over the first eight months of this year.

How high December’s results go – topping 1.6 million units would put it in an 18 million-SAAR territory – will depend on how eager automakers are to end the year on a good note, shoring up market shares and alleviating the rest of their excess ’17-model inventory.

Including SUVs, sales of so-called utility vehicles accounted for 46% of November deliveries, compared with 42% last year. Despite weakness in the Large and Middle Luxury models, SUV sales increased 5.9% year-over-year in November, and are up 5.0% year-to-date.

Sales in the Large Pickup segment continued a long string of increases in November, though the year-over-year increase of 2.0% represented a cooling off from the 14.5% and 9.5% increases in October and September, respectively.

Although weakness persists nearly across the board in cars, midsize models remain the biggest drag, especially the Lower Middle segment. Once the largest segment, Lower Middle penetration in November for the first time in decades fell below 10% for a second consecutive month. At one time the segment accounted for over 17% of the market, and was over 16% as recently as 2012.

Keeping it from falling further was a 24% year-over-year rise from the redesigned Toyota Camry. However, the rest of the segment declined 28% in November with double-digit losses from the Chevrolet Malibu, Ford Fusion, Honda Accord, Kia Optima, Mazda6, Subaru Legacy and Volkswagen Passat. If the redesigned Accord, which hits the market soon, replicates the success of the new Camry, Lower Middle just might become a 2-vehicle segment for all practical purposes.

Among the market leaders, fleet volume bolstered Ford to its second straight increase, but Toyota’s results declined for the first time since May.

GM posted its first decline in three months but its market share of 17.7% was higher than its 11-month mark of 17.3%.

Honda recorded a strong gain of 8.3%, and Nissan is estimated to have recorded a 14% rise. With a pullback from fleet volume, FCA US posted a 3.7% decline.

European luxury brands did especially well, mainly thanks to CUVs. Including its Mini brand, BMW, thanks also to deliveries of its redesigned BMW 5-Series luxury sedan, recorded only its second increase since January 2016. The BMW brand alone recorded a 7.1% increase

Bucking the trend, Jaguar, which was posting huge year-over-year gains – sometimes more than triple – from the second half of last year through the first half of 2017, recorded its third decline in the past four months.

Rounding out the industry, despite some of the biggest spiffs in the market based on data from ALG, Hyundai and Kia recorded declines of 8.5% and 15.6%, respectively. Including Audi and Porsche, Volkswagen Group was up 3.2%, while Mitsubishi was up 25% and Mazda declined 2.6% on the weakness of its cars.

Tesla, which is initially estimated, increased 14.1%.