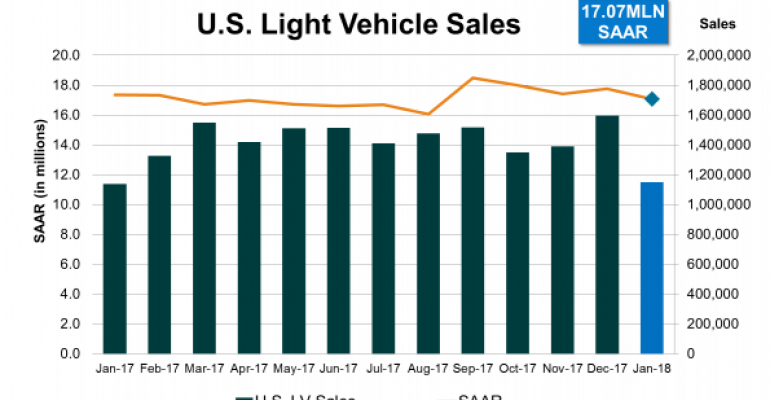 With CUVs hitting a record 38.6% market share in January, it&rsquo;s just a matter of time before penetration tops 40%.

With jobs and earnings growth spurring confidence in the economy, plus a boost from higher incentives, U.S. light-vehicle sales started 2018 on a strong note.

Thanks to an extra selling day in the month, total volume was slightly (1%) above the year-ago month, while both the daily selling rate and seasonally adjusted annual rate fell from year-ago.

However, despite the SAAR declining to 17.1 million units from year-ago’s 17.3 million, the month was still strong by historical standards, and was the third straight January to start the year off at a 17 million-plus rate.

An initial estimate for the month by ALG showed incentive activity increased 9.8% from same-month 2017. ALG also reported an increase in average transaction prices, but at 1.9%, it was well below the gain in incentives.

Also helping the volume gain was an estimated 1.9% increase in fleet deliveries from January 2017.

Most manufacturers posted declines from year-ago. However, Mazda, Mitsubishi, Nissan, Toyota, Volvo and Volkswagen Group bucked the trend with increases. Although recording a decline, BMW increased its market share in January from the year-ago month.

All other manufacturers recorded declines, with FCA US and Ford posting double-digit losses.

Car deliveries declined 14.3% in January from like-2017, with penetration falling to 31.9% from 36.2%. Light-truck deliveries recorded their fifth straight increase (3.8%), and, in fact, have only declined year-over-year twice since September 2010.

One bright spot in cars was the Luxury Car segment group, with sales up 2.7%, it was the first increase for the sector since September 2015. Among other groups, Small Car declined 16.2%, Middle Car fell 16.5% and Large Car was down 37.1%.

Trucks were led by an 8.0% increase in CUV sales, with a 21.8% surge in the Small Pickup segment – due to big gains by the Chevrolet Colorado, Nissan Frontier and Toyota Tacoma – also helping. Full-size vans also increased 1.0% from January 2017.

Besides the volume gain, CUV market share increased to 38.6% in January from 34.8% a year ago. The January mark was a record for CUV penetration, leaving it just a matter of time before share tops 40%.