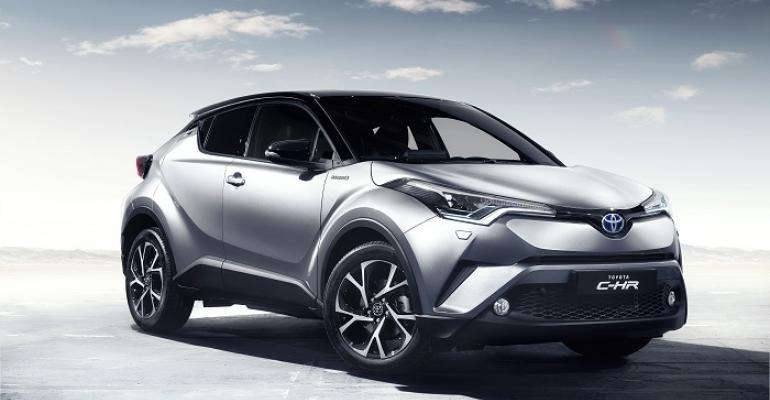 The automaker&rsquo;s entrant into the exploding Small CUV segment has a diamond-themed design and promises sporty handling, but uses a naturally aspirated 2.0L engine.

The American version of the Toyota C-HR debuts today at the 2016 Los Angeles auto show, following the European model’s rollout at the 2016 Geneva auto show.

The ’18 C-HR, which was slated to become a Scion in the U.S. until Toyota killed the youth brand, is the No.1 Japanese automaker’s entrant into the burgeoning Small CUV segment.

The segment, filled with models from every mainstream automaker save for Toyota, Ford and Hyundai-Kia, is up 30.4% through October to 795,830 units, WardsAuto U.S. sales data shows.

Toyota no doubt is hoping to create more growth next year with the C-HR, which stands for Coupe High-Rider and “represents a leap forward in design, manufacturing and engineering,” while carrying on the Scion C-HR concept’s “avant-garde physique.”

Using the “Distinctive Diamond” theme (in profile Toyota says the C-HR resembles a diamond on its side), designers strived for an edgy and muscular appearance.

Key styling features include slim projector-beam halogen headlights with LED daytime running lights extending nearly to the C-HR’s front-quarter panels; deep, curving character lines that come out of a large Toyota badge and run below windows and above the rear wheel into the C-pillar; and in the rear of the vehicle protruding taillamps and an inward tapered hatch.

Inside the C-HR continues the diamond theme, with the shape seen in dual-zone climate controls, speaker surrounds and the headliner portion above the front seats. 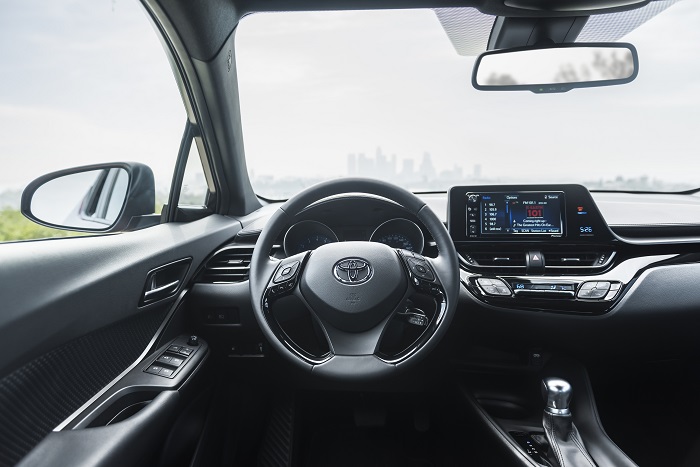 The angled dashboard is driver-centric, which Toyota says is reflective of the sports-car character Hiro Koba, racing fan/deputy chief engineer, put into the CUV.

A touchscreen at the top of the center stack helps reduce driver eye movement, while a twin-ring gauge cluster keeps information handy; a slim, small-diameter steering wheel mimics those in sports cars.

The bucket seats are bolstered and, to create rear-seat room, front seatbacks are scalloped in back and carved at the bottom and the headliner is chamfered. The rear seat splits 60/40 and folds flat, Toyota says.

Two grades of the C-HR will be offered at launch: XLE and XLE Premium. The former has a variety of high-end features including a leather-wrapped steering wheel, power-fold and heated mirrors, electric parking brake and dual-zone climate control. The XLE Premium has heated front seats, heated side mirrors with a Toyota C-HR puddle lamp and smart key with push-button start.

The C-HR is 171.2 ins. (4,348 mm) in length, placing it midpack in the Small CUV segment, between the shorter Chevy Trax, Honda HR-V and Jeep Renegade and longer Hyundai Tucson, Subaru XV Crosstrek and Volkswagen Tiguan.

The C-HR rides on Toyota’s New Global Architecture (TNGA) platform, hallmarks of which include a low center of gravity, low weight and high strength. Toyota further firms it up with spot welding, gussets, braces and adhesives in and on select areas. This is said to help give the CUV sports-car-like responsiveness, linearity, consistency and comfort.

The C-HR has a newly developed MacPherson-strut front suspension and all-new double-wishbone rear suspension. The front uses Sachs dampers and the rear has Toyota’s first use of Sachs shock absorbers with urethane upper supports. The urethane, coupled with an aluminum-cast upper support housing, “aids in the dampers’ absorption efficiency” and “greatly benefits passenger comfort, cabin quietness and vehicle agility.”

The C-HR’s driving performance and ride quality has been tested for years, including on Germany’s famed Nürburgring race circuit, Toyota says.

Unlike the HR-V, the competing Toyota will have no manual-transmission option, at least at launch. Toyota says the 2.0L will be mated to a CVT. The 3ZR-FAE engine, used overseas in the Avensis and RAV4, uses current and “extensively optimized” technologies including variable valve timing and Valvematic to improve fuel economy and smooth operation. Valvematic provides “optimal intake valve (not on exhaust side) operation relative to engine demands,” Toyota says, noting the catalyst is warmed earlier during the ignition cycle to limit exhaust emissions.

The CVT is an all-new design with reengineered pulleys for better acceleration and fuel economy, as well as a new belt structure to limit cabin noise. Toyota touts a world-first coaxial 2-port oil pump system as allowing for continuous oil-pressure modifications in varied driving conditions.

The C-HR goes on sale in spring 2017 in the U.S. It is being imported to the U.S. from Toyota’s Sakarya, Turkey, plant, which began production of the model Nov. 9.