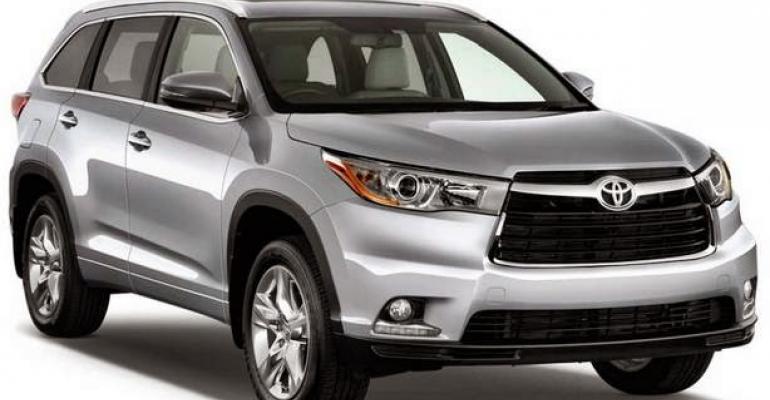 The traditionally car-centric Japanese automaker predicts a record light-truck sales year in the U.S. and is on the hunt for more capacity. &nbsp;

OJAI, CA – American consumers’ shift from cars to light trucks has Toyota scrambling to keep up.

The traditionally car-centric automaker has been caught short, with not enough CUVs, SUVs and pickups in stock to meet demand.

Toyota officials here are looking at the glass half-full, saying the lack of light-truck inventory, not the decline in car sales, is the reason behind Toyota Div.’s 3.7% volume drop through August.

The rapid change in preference from cars to light trucks “shows you the challenge we all have in the industry to be able to pull out a crystal ball and put a good 3- to 5-year peg on what’s going to happen down the road, because it takes you that long to put a (production) footprint in place,” Bill Fay, group vice president-Toyota Div., tells WardsAuto on the sidelines of a ’17 Prius Prime media preview.

While Toyota once predicted the Prius hybrid car would be the model to overtake its No.1-selling Camry midsize sedan, it’s the RAV4 midsize CUV that’s on its way to toppling the Camry.

The RAV4 outsold the Camry for the first time in a single month in August, with 33,171 deliveries to the Camry’s 32,864. Toyota is eyeing 400,000 RAV4 U.S. sales annually as early as next year. The Camry traditionally has been the only Toyota to sell above 400,000 units annually in the U.S.

The Camry is in negative territory through August, down 8.6%, while the RAV4 has risen 15.0% and sales of the Highlander mid-large CUV are up 7.3%.

It’s a scenario common across Toyota’s lineup, which has seen car demand fall 11.1% through August to 644,123 while light truck deliveries rose 3.9% to 720,873, essentially a reversal of the car/light-truck ratio of January-August 2015.

Toyota is trying any and every way to grow light-truck supply. Overtime is being utilized heavily.

It also is adding an all-new model next year, the C-HR small CUV built in Turkey, and Fay hints there will be additional new CUVs to come.

While the automaker added capacity this year for 30,000 more Highlanders annually at its Princeton, IN, plant, helping increase the model’s production 11.9% through August to 148,015, WardsAuto data shows, it awaits other planned output increases to take effect.

Last week, Toyota announced it would invest $150 million to raise Tacoma midsize pickup production at its Baja California, Mexico, plant, but the resulting 60% increase in output won’t materialize until 2018.

The planned increase in RAV4 production in Canada, with the vehicle set to go into the Cambridge, ON, plant that is the current home to the Corolla, won’t bear fruit until 2019.

In the meantime, Fay says Toyota is examining its manufacturing plans, but denies the notion the automaker’s forthcoming Corolla plant in Mexico could build another model, possibly a light truck.

“I think everybody is plugging in what’s changed into their crystal ball and trying to figure out what’s the footprint we need for 2020, 2021 and 2022,” he says. “I think that’s being done as we finalize the planning for that plant in Mexico. It’s still 100% full-bore on Corolla…(but) how can we better align ourselves in North America to build in 2020 and beyond what we need to be?

“Still, all systems (are) go on Corolla, but I think that’s part of the overall review of, ‘How do we build what the market wants?’”

Fay is quick to note the decline in Camry and Corolla sales is not expected to get much worse, but concedes a bit more attention will have to be paid to incentives and marketing.

“If we can achieve that, it might not necessarily be a bad thing. It means we adapted well to where the consumer is going and we can keep the franchise, which is Camry, alive and well.”